South Korea, 13 January, 2016 – More than 250 urban policy makers, government officials, development partners and non-governmental actors from more than 25 countries met in South Korea for a week of activities around National Urban Policies from December 14-18 2015. Opening the National Urban Policy Week by video link, Dr. Joan Clos, Executive Director of UN-Habitat stated: “Since the creation of the modern state, and the evolution of the modern state, the role of the central government is more and more important.  I think that this is the reason…that justifies the need of a national urban policy…. this fundamental goal of the national government in the influence and in the characteristics of the final urbanization quality of any country is something that we want to underline very much in the conclusions of Habitat III.” 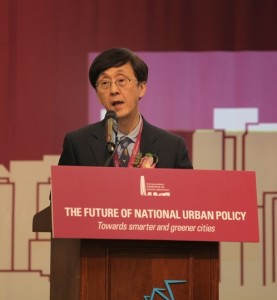 Dr Kyung-hwan Kim, Vice Minister from the Ministry of Land, Infrastructure, and Transport of Korea

In his opening remarks, Dr Kyung-hwan Kim, Vice Minister from the Ministry of Land, Infrastructure and Transport of South Korea reflected on the approaching Habitat III Conference and the importance of National Urban Policy.  He commented that: “National urban policy has much to contribute to realizing the city we want…the national government needs to provide a common vision and strategies to achieve sustainable urban development, guidance on the future course of spatial development, and priorities in urban infrastructure investments.” Read the full keynote speech here.

The Conference encouraged peer-to-peer learning where representatives presented their countries’ experience with National Urban Policy. These case study sessions worked to encourage the establishment and strengthening of partnerships with the ultimate goal to define policy solutions to urban problems. It also featured an Exhibition on Innovative Urban Planning and Urban Policy.

Representatives from more than 17 countries took part in the piloting of UN-Habitat’s capacity development session on National Urban Policy. The training session strengthened the capacities of policy makers and other stakeholders in the processes of NUP. Participants enhanced their knowledge on urban policy by working with tools, instruments and methods to formulate, implement and monitor and evaluate national urban policy. Participants were hosted by the Korea Land & Housing Corporation for a two-day tour.  The tour began in Seoul where participants visited the USD 900 million Cheonggyecheon urban renewal project.

Participants visited a number of Korean New Towns, including Pangyo, Dongtan, and Sejong. The week’s activities highlighted the importance of National Urban Policy and the need and desire for the establishment of an international community of practice to connect practitioners. The location of the next Conference on National Urban Policy will be released in the next three months.