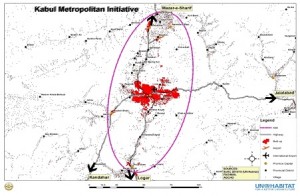 Also attending were officials from the Afghan Land Authority, the Governors of Wardak and Logar provinces and Mayors of the Kabul City Region. UN-Habitat is supporting the Kabul Metropolitan Initiative and presented preliminary findings on land use mapping, population estimates and a city-regional traffic and mobility survey. The meeting was also attended by the Leader of the Regional and Metropolitan Planning Unit of UN-Habitat, advocating functional linkages with a National Urban Policy and Spatial Strategy.

The Kabul Metropolitan Initiative (KMI) was developed upon request by the President of the Islamic Republic of Afghanistan Mr. Ashraf Ghani, to foster spatial planning assistance for the greater Kabul area. On 17 August 2015, the President outlined a comprehensive ’21 point agenda’ for the regeneration and future development of Kabul Capital City and region that require attention at a city-regional or metropolitan level. Under the umbrella of the Urban National Priority Programme (U-NPP) of the Government of the Islamic Republic of Afghanistan, urban recovery and development strategy for the Greater Kabul Area will be initiated and implement as an U-NPP Flagship project.

“I am very happy to empower subnational authorities in the growing capital metropolis”, Mr. Naderi said.  “A national urban priority programme is in full preparation and I am delighted to announce that the Kabul Metropolitan Initiative is enshrined within the U-NPP framework as one the three cross-cutting flagship actions. I hope we will all strongly support H.E. President’s vision to make Kabul capital city and its wider region again a prosperous and beautiful place to live, work, study and recreate”, the minister added.

“Subnational planning and governance are key to restore and harness civil trust and optimism for a better future for our cities and citizens, but also more needs to be done to bridge the gap between central and local level, with the provinces and governors areas the par- excellence bridge builders and therefore essential partners in the metropolitan cooperation. Kabul Metropolitan cooperation is not only important to boost the urban economy of the capital city, but will also inspire the 4 other national city- regions to initiate similar multi-scale and multi stakeholder cooperative platforms”, Deputy Minister of Municipalities Abudl Baqi Popal said.

“The Kabul Metropolitan approach should also promote a new urban cultural and citizenship” Kabul Governor Hamed Akram added, while his colleagues of two neighboring provinces commented that “The metropolitan planning approach cannot only focus on the core city Kabul; it should also plan for extensions and development of the towns around the city and along the main roads.” 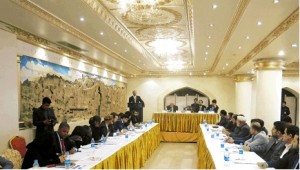 This conference is a follow up of the first Kabul Metropolitan Conference that took place in Kabul  on 21 December 2015, hosted and chaired by the Kabul Mayor, and attended by all key players at central and municipal level. Both conferences meetings exchanged views on metropolitan planning and governance, with the second conference resulting in a joint declaration including following key features:
1. The Kabul metropolitan cooperation and governance is essential to steer a more sustainable development and growth of the capital city and its surrounding towns and villages.

2. To that end a first Kabul Metropolitan Forum (KMF) will be established, with quarterly meetings prepared by a technical secretariat.

3. The key partners of this multi-scale and multi-stakeholder metropolitan forum will comprise all relevant central, provincial, municipal authorities and agencies, as well academia (university), civil society and business community.

4. The KMF will only deal with issues that are of a truly metropolitan nature and cannot be properly addressed by either central or local level only, such as urban growth management, new city extensions, metropolitan transport and mobility including public transport, urban environment including river and water management, wetlands, large parks and re-forestation, urban agriculture and food security, regional tourism and cultural and natural heritage preservation.

5. A period of 12 to 18 months will be needed to set up  operationalize  the KMF, draft a shared vision and growth management plan, identify and prepare implementable metropolitan projects, engage with citizens and put together a roadmap and business plan for more formal metropolitan governance and service delivery and revenue generating metropolitan agencies.

The Mayor of Charikar, one of the two municipalities in the northern part of the Kabul metropolis, commented: ‘This metropolitan cooperation is important and unique: we are doing this without any funding because we are convinced of its potentials to achieve a more balanced and thus prosperous capital city region.” As a conclusion of the Conference, all key partners agreed to present this Joint Kabul Metropolitan Declaration, combined with a Roadmap and budget-estimation to H.E. President Ashraf Ghani for final decision on the best way forward. The spatial metropolitan planning and governance for the greater Kabul area, the Kabul Metropolitan Initiative, has made a significant progress through the Conference.