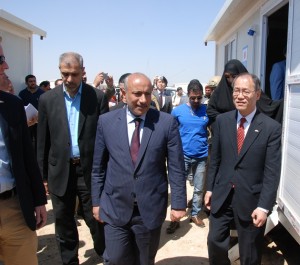 01 April 2016, Kerbala – The United Nations Human Settlements Programme (UN-Habitat) organized a ceremony to mark the delivery of a new IDP shelter site in Kerbala and to launch two projects funded by the Government of Japan to support the humanitarian response and recovery activities in Iraq; the “Gender-sensitive Durable Shelter Support” and “Promoting Urban Recovery in Newly Liberated Areas in Iraq.”

The ceremony took place with attendance of Fumio Iwai, Ambassador of Japan to Iraq, Grande, the Deputy Special Representative of the Secretary-General/Resident Coordinator/Humanitarian Coordinator in Iraq, Nsaief AlKhatabi, Chairman of Kerbala Provincial Council, and other governmental officials in Kerbala, where a new shelter site is delivered by UN-Habitat through funding from the Government of Japan provided in 2015.

The new site was planned and equipped with durable prefabricated shelter units, basic infrastructure and public facilities. This comes in response to massive assistance needs for internal displaced persons in the country caused by the crisis in Iraq. The numbers of IDPs in the country reached 3.3 million in March 2016. As of 3 March 2016, Kerbala Governorate has received more than 67,000 IDPs. In this phase the IDP shelter site in Kerbala is expected to accommodate more than 400 vulnerable IDP families. 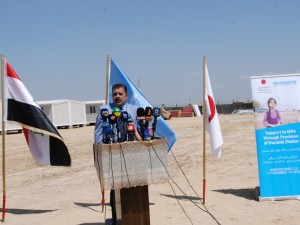 A dignified option for IDPs

Mr. Iwai stated that he is glad to support UN-Habitat’s projects across Iraq to improve the living conditions of IDPs. He also emphasized that the Government of Japan is committed to engage with the humanitarian and stabilization efforts in Iraq and they will stand side by side with the people of Iraq to move forward on the liberation from terrorism.

Ms. Grande announced to the media that the government of Japan has provided substantial financial support to help the IDPs and the returnees in collaboration with UN agencies and the government of Iraq. Ms. Grande added that provision of durable shelters implemented by UN-Habitat is the most dignified option for IDPs until their return is secured.

The on-going project, “Humanitarian Support to IDPs in in the Republic of Iraq including the Kurdistan Region of Iraq through Provision of Durable Shelter”, has addressed humanitarian needs by constructing shelter sites for IDPs equipped with durable shelters, basic infrastructure and social services. The project will conclude with delivery of shelters for over 6,500 vulnerable people in Kerbala, Dohuk, Baghdad and Missan governorate in few weeks.

Due to protracted conflict with the Islamic State of Iraq and the Levant (ISIL), humanitarian assistance needs throughout Iraq is still enormous. Despite the efforts of the national government and local authorities in providing support to IDPs and returnees, the severe budget crises because of the decline in the oil prices and the cost of the war against ISIL necessitate the mobilization of substantial humanitarian support.

The Government of Japan also supports UN-Habitat to tackle the crisis in Iraq from a different angle, aiming to promote urban recovery of newly liberated areas and in targeted areas in Iraq and facilitate returns under the project titled “Promoting Urban Recovery in Newly Liberated Areas in Iraq”. The project expects to enhance self-reliance of and mutual assistance in the affected communities.

Erfan Ali, Head of UN-Habitat Iraq, in his remarks underlined the importance of the new Urban Recovery initiative that will be funded by Japan based on the good practices of UN-Habitat, aiming to support empowerment of communities in newly liberated areas in Iraq through self-repair and self-maintenance of housing and basic community infrastructure damaged by crisis.