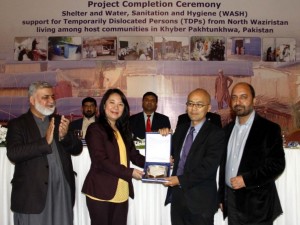 The ceremony was inaugurated by Col. Khuda Buksh, Director Response NDMA, followed by remarks from PDMA, Embassy of Japan in Pakistan, UN-Habitat, MHI, and UNRC and HC. The event saw a huge participation from the Government, disaster management authorities, and humanitarian sector, media, and UN agencies. The ceremony was a platform to highlight accomplishments of the project, commend the work of all partners, distribute certificates of appreciation, and speeches from beneficiaries were highlights of the event wherein they expressed how the project impacted on their lives.

Col. Khuda Buksh said, “NDMA, especially Chairman NDMA, Maj (Gen) Asghar Nawaz appreciates UN-Habitat, Government of Japan, SAFRON, MHI, Provincial Governments of KPK, PDMA, and FDMA and other partners who rendered their untiring services in management of North Waziristan TDPs. I will specially recognize and thank the generous assistance of Government of Japan to UN-Habitat, and assure our Japanese brethren and all contributing partners that Pakistani nation will remember their timely assistance that came at the most challenging times of our history.”

Ms. Bella Evidente, UN-Habitat Pakistan Country Programme Manager, while commenting on the fruitful completion of the project said, “UN-Habitat is grateful to the KP Government, PDMA, relevant district authorities and NDMA for their support which enabled us to reach out to the beneficiaries and successfully implement the project. The work delivered by the partners is well appreciated by the TDPs who have been provided decent living conditions in their temporary place of accommodation. The People of Japan have been very generous in their funding for this cause and today I am really happy to see this project’s successful culmination. I hope that all partners continue to support relief and rehabilitation efforts for the TDPs.”

Mr. Syed Javid Gillani, Head of Operations, Muslim Hands said, “The technical support and strong coordination provided by UN-Habitat team, Pakistan Army, PDMA, FDMA, and District Administrations in Bannu, Laki Marwat, and D.I. Khan made it possible for Muslim Hands to reach out more than 440,000 Temporary Dislocated People (TDPs) and host communities. Here the role of communities, their engagement, and their anticipation is dearly appreciated. All this shows that if we are united for a common and noble cause we can make miracles happen.” Mr. Junya Matsuura, Chargé d’affaires ad interim, Embassy of Japan in Pakistan said, “The work delivered by UN-Habitat and its implementing and monitoring partners, MHI and FRD is highly commendable and well appreciated by the Government of Japan, particularly because due to security reasons, we lack direct access to the project’s areas. We, therefore, are extremely happy to see the fruit of everybody’s hard work and contribution. We hope the partnership among Japan, Pakistan, and the UN agencies will be strengthened through Japan’s contribution to peace and prosperity in Pakistan.”

Mr. Neil Buhne, UN Resident Coordinator and Humanitarian Coordinator for Pakistan in his closing remarks to the participants said, “I have worked in other countries where too often the needs of host communities are overlooked while the displaced community are provided relief and support that makes their lives better, this however was a forward-looking project and the Government of Japan was quite visionary to address the needs that both the host communities remain strong and at the same time the people who were displaced are given a chance to return strongly. The cooperation extended by the Government of KPK and civil society organisations, and the efforts of UN-Habitat and MHI, with a well-supporting donor made this project a success.”

To contribute to the return and to alleviate the displacement crisis, the Government of Japan generously donated $US 1.75 million to UN-Habitat for provision of integrated Shelter and Water, Sanitation, and Hygiene (WASH) assistance to Temporary Dislocated People (TDPs) from North Waziristan living among host communities of the Khyber Pakhtunkhwa province in districts Bannu, Laki Marwat, and Dera Ismail Khan. UN Habitat engaged Muslim Hands International (MHI) as local implementing partner and Foundation Rural Development (FRD) as monitoring partner, and with the support extended by PDMA, NDMA, relevant local authorities, Assistant and Deputy Commissioners of the area the project was able to provide improved shelter conditions with increased capacity to return to 1800 TDPs families and access to safe water and improved sanitation and environmental hygiene conditions to 3846 TDPs families. The overall activities of the intervention have led to the establishment of a decent standard of living for people while temporarily hosted in the communities of Khyber Pakhtunkhwa Province. 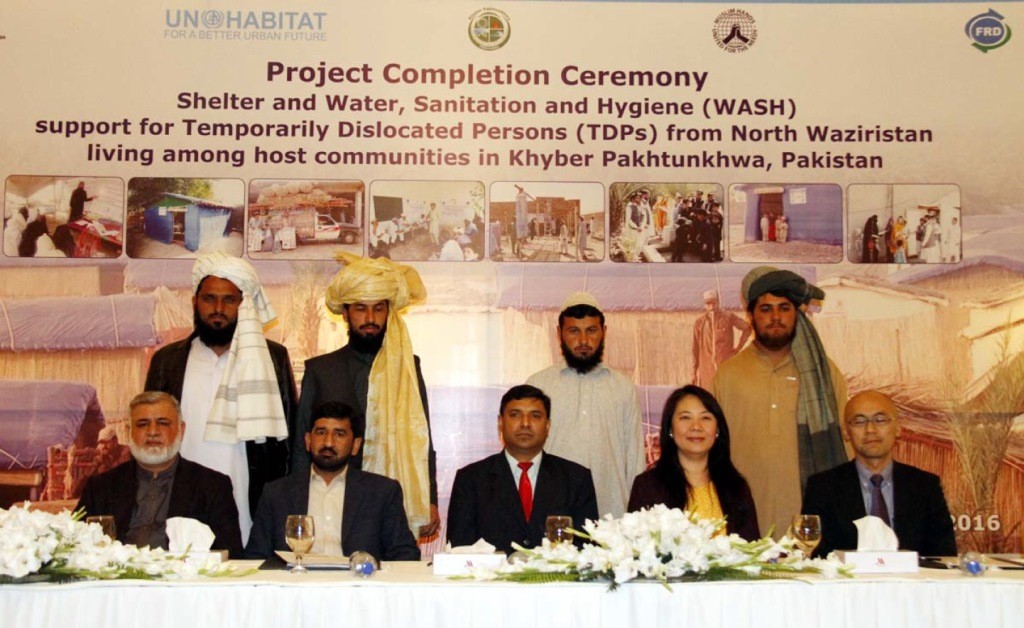