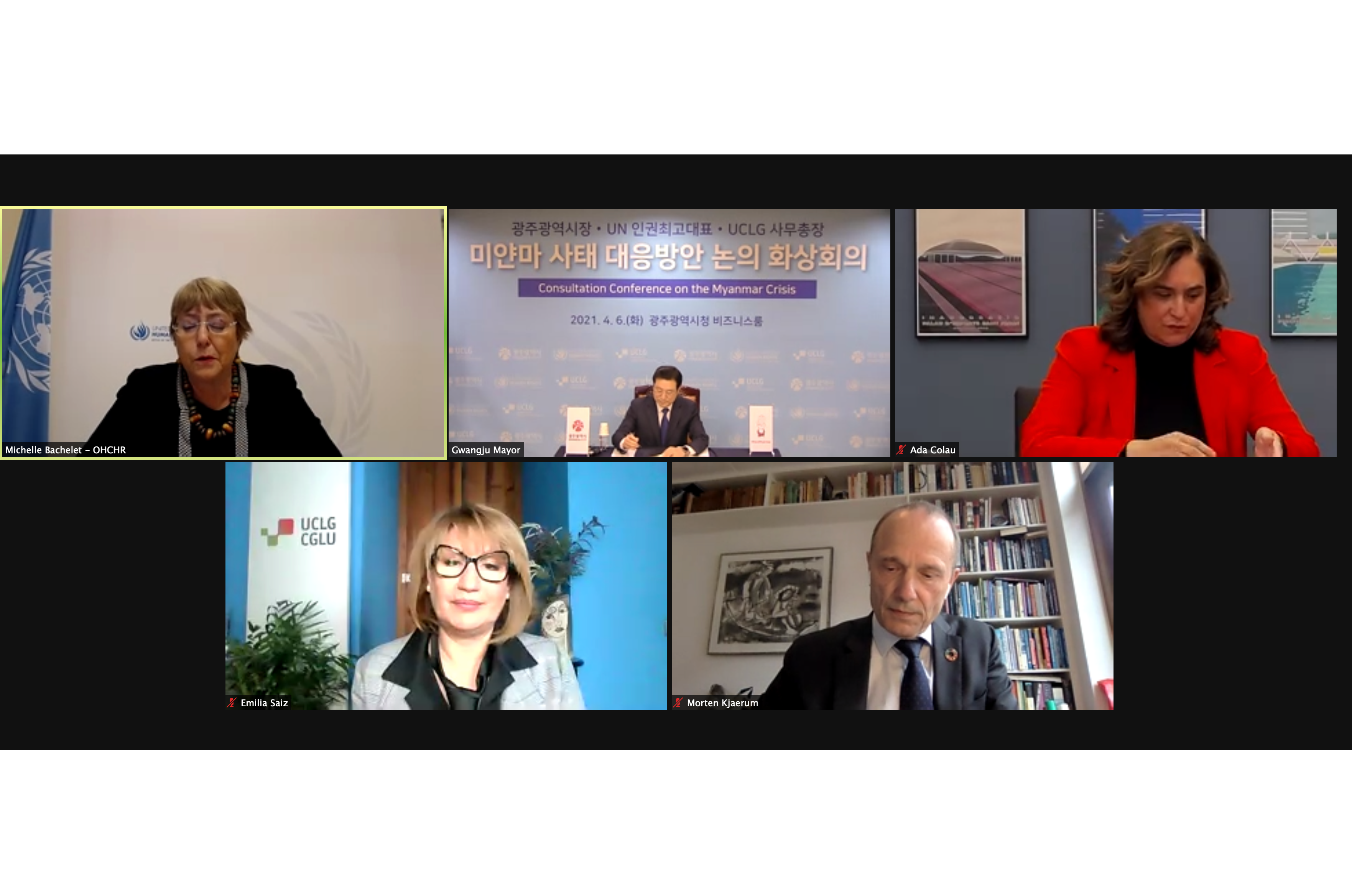 Participants to the meeting highlighted the key role of local governments in pushing for new solidarity initiatives that particularly focus on raising awareness on the situation of local communities and those most affected by human rights violations. Better structuring expressions of solidarity around regional and UN efforts aimed at overcoming the crisis was deemed as essential to find a pragmatic solution before the situation worsens. Local governments have a role to play in providing a platform to showcase the challenges faced and the positive contribution by local actors and human rights defenders on the ground.

High Commissioner Bachellet commended local governments’ efforts to protect human rights in the city as well as internationally, and argued how cities have a role to play in finding solutions to the crisis and supporting local communities in Myanmar.

“I see local governments as key players for the implementation of human rights in any society. Our Office stands ready to support and work with local governments in finding a solution to this crisis and to better protect people’s rights on the ground“

Mayor Lee shared the efforts led by his city government and Gwangju citizens to express solidarity with the people of Myanmar: a human rights crisis that greatly resembles the brutal repression of Gwangju citizens during the May 1980 Uprising. Mayor Colau highlighted how local governments were looking forward to continuing structuring solidarity initiatives to protect human rights and democracy across the world, supporting to this end the work of the multilateral system.

The UCLG Statement on Myanmar, which echoes the concerns of the UN and ASEAN on  the military takeover, and calls on human rights to be protected in the region and restoring communications, was presented by Secretary General Emilia Sáiz, who also highlighted the importance of champion cities such as Gwangju to advance local governments’ contributions to resolving the crisis.

In this sense, the Raoul Wallenberg Institute’s Director Kjaerum suggested a better articulation between the UCLG constituency and local governments participating in the World Human Rights Cities Forum of Gwangju in developing new solidarity initiatives. Those should aspire to remind the people of Myanmar that they are not alone and have not been forgotten.

Participants agreed to continue exploring synergies to showcase the role of local governments in promoting solidarity and a pragmatic resolution to the Myanmar crisis based on human rights and respect to the rule of law.

Under the leadership of its Gwangju co-presidency and other human rights cities’ champions, the UCLG-CSIPDHR will follow-up on the meeting to build a shared position on this matter. This will address the worsening situation of human rights in Myanmar and recall how the indiscriminate use of force is particularly affecting the civilian population and displaced people. It will also aim at urging the international community – and human rights cities in particular – to explore available channels that can help put an end to repression and reinstate the democratic order and the rule of law.

Source: UCLG
Link: UCLG and the Office of the High Commissioner for Human Rights address the importance of local and regional governments in protecting human rights