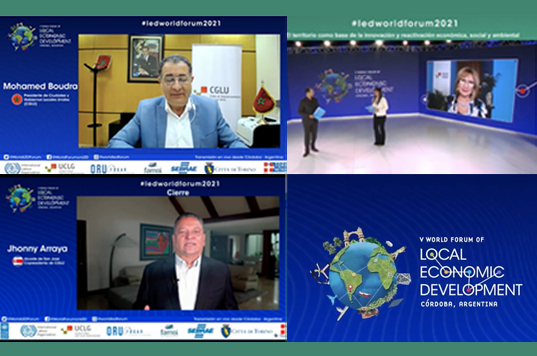 The opening remarks of President Mohamed Boudra in the framework of the Pact, the debates led by UCLG Secretary General, Emilia Saiz, the impetus of UCLG leaders and the and support of the UCLG LESD Committee and its co-chairman, Francisco Toajas, reaffirmed that the World Organization of UCLG will continue working together with the partners of this Forum on economic policies, so that people and planet are always at the centre. „The current crisis shows us that it is essential to have mechanisms for collaboration, governance and participation between territorial governments; technology clusters, research centres, universities, companies and civil society must guarantee spaces for dialogue and knowledge sharing that will allow us to face the challenges during and after the pandemic“, Mohamed Boudra, UCLG President. The WFLED is in this sense a valid and interesting space for the work towards the Pact for the Future led by UCLG. 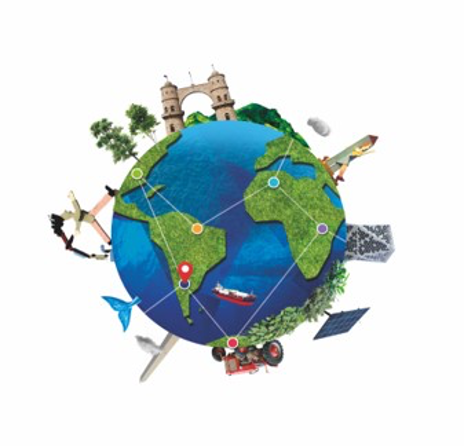 UCLG played an active role in the three years of organisation that culminated in the celebration of the V edition of the World Forum of Local Economic Development. The WFLED has been consolidated as a global advocacy process initiated a decade ago by the Andalusian Fund of Municipalities for International Solidarity, FAMSI, with the first Forum held in Seville. Today, 12 institutions, including UCLG, the United Nations Development Program (UNDP), the International Labour Organization (ILO), the Organization of Regions ORU Fogar, Sebrae, the city of Turin, Cabo Verde Government and the Agency of Local Economic development from Cordoba ADEC, are engaged with the aim of improving the political and institutional dialogue between actors involved in local and regional life.

The event saw the participation of more than 200 speakers from 60 countries, in 58 hours of transmission, three languages, 210 thousand live reproductions from 113 countries and 45 sessions, all over the world, to broadcast and make possible the dissemination of the contents, and the celebration of 15 parallel activities. More than forty members of United Cities and Local Governments, partners, regional sections and Committees took part as speakers, facilitators, or organizers of roundtables, especially through the Committee on Local Economic and Social Development, which led the network’s participation, and is integrated into its work plan.

In line with the UCLG Decalogue for recovery, the emphasis of the VWFLED on the future of work, resulted in a critical angle to strengthen local actors in leading the recovery. The role of territories, the public service guarantee, women’s leadership, the interconnected urban systems, relations with the private sector and universities, the new ways of decentralized cooperation, and finally, strengthening solidarity and partnership, are cornerstones to close the increasing gap of inequalities, towards a sustainable recovery with territorial innovation, new models of sustainable production and decent, stable and quality work.

This event is part of an open working process, which promotes international dialogue and exchange of experiences in Local Economic Development. It provides the opportunity to transform a global alliance of actors into concrete partnerships at national and local level. Its remarkable potential comes from the large number of diverse leaders and practitioners from national and sub-national governments, the private sector, academia, civil society, and others.

The Forum concluded, after the reading of the final Declaration. The UCLG co-president Johnny Araya reacted to the expectations that the mayor of Córdoba, Martín Llaryora, raised at the opening session. In particular, to the challenge of reconstruction of an economic model that is obsolete and has led to social inequalities. Indeed, local, and regional government will need to lead towards a world of solidarity with new economic models that are only possible in partnership. The Mayor of San José and co-president of UCLG, Jhonny Arraya, stated in his closing speech „the final declaration of the Forum indicates a concrete path of concerted implementation of local, regional, national policies and global agendas, in which it is essential to act in an articulated manner, pursuing clear objectives that have a real impact on the territory. And in line with UCLG’s strategy, towards the renewal of the social contract with the Sustainable Development Goals at its core“.

Source: UCLG
Link: The V World Forum of Local Economic Development comes to an end: Transition to a sustainable future: The role of territories in times of uncertainty