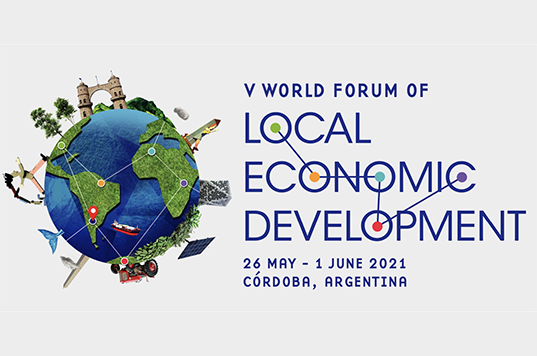 Under the theme „Transition to a sustainable future: The role of territories in times of uncertainty„, the event has three thematic axes:

– Territory as the basis for economic, social and environmental innovation and reactivation;

– Territorial economic models to tackle inequality in the face of the current pandemic crisis; and

– The future of work and the work of the future from a territorial perspective in the context of the crisis generated by covid-19.

UCLG is part of this global dialogue that is renewed, every two years, in a major event in which local governments are part of a Committee composed of the Agency for Economic Development of the city of Cordoba (ADEC), the Municipality of Cordoba, the Government of the Province of Cordoba and the National Government in coordination with an International Committee composed of the United Nations Development Programme (UNDP), the International Labour Organisation (ILO), the United Regions Organisation (ORU FOGAR), the Global Network of United Cities and Local Governments (UCLG), the Andalusian Fund of Municipalities for International Solidarity (FAMSI), the Brazilian Micro and Small Business Support Service (SEBRAE), the Municipality and Metropolitan City of Turin, and the Government of Cape Verde.

In its fifth edition, the WFLED will count with more than more than 40 speakers and moderators from the network and the leadership in multiple spaces of our committees and regional sections, including the Plenary Session of the first of the thematic lines, the opening and closing sessions, a side event and other panels and roundtables.