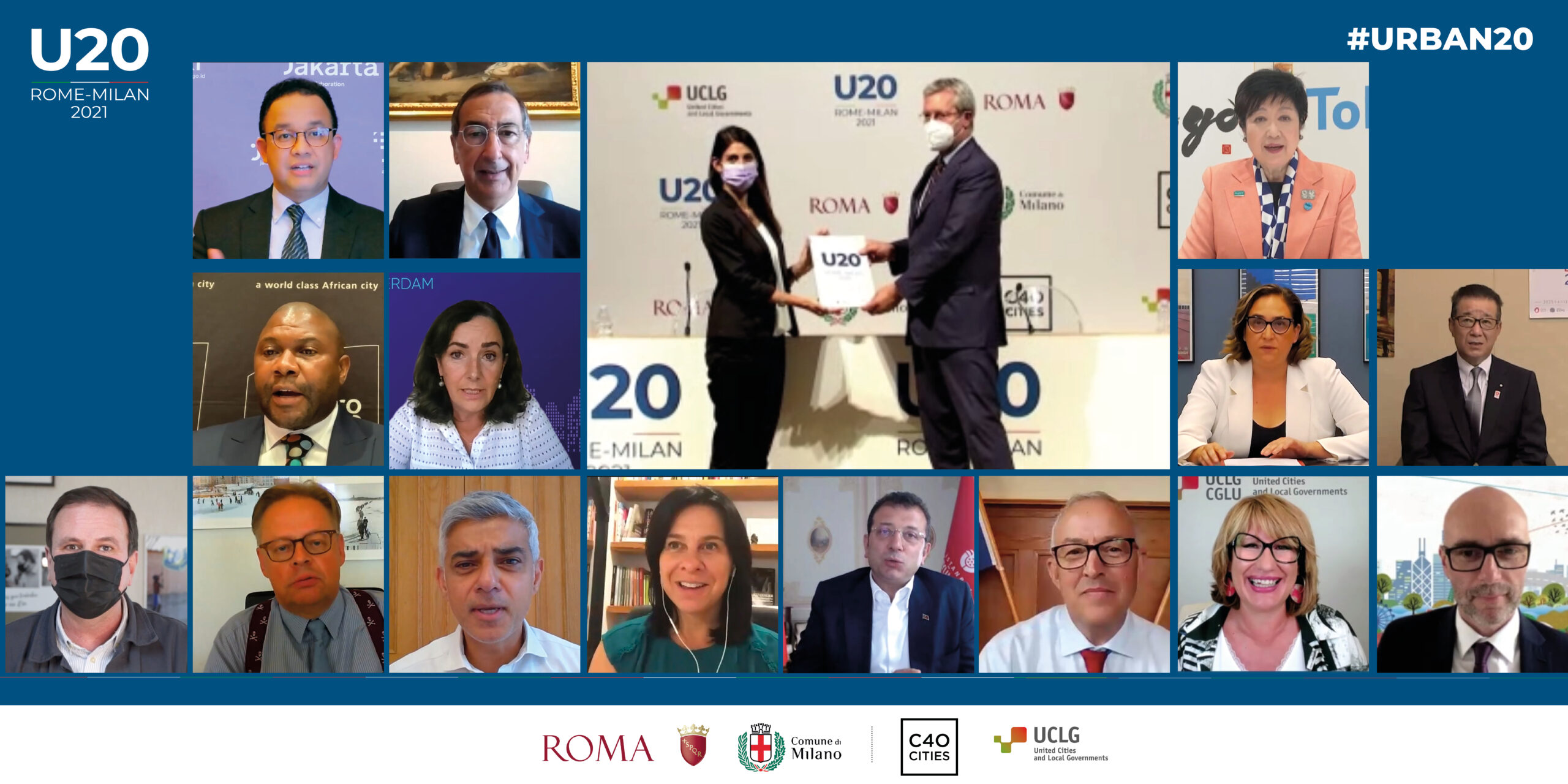 The virtual Summit was hosted by the U20 Co-Chairs, Virginia Raggi, Mayor of Rome and Giuseppe Sala, Mayor of Milan. The mayors of the cities of Amsterdam, Barcelona, Berlin, Buenos Aires, Durban, Helsinki, Istanbul, Jakarta, Johannesburg, Montreal, Osaka, Rio de Janeiro, and Rotterdam, laid out their expectations for the G20 Summit during the U20 Summit, as well as the need for joint collaboration between cities and G20 Countries.

In what is a record number for the initiative, 41 mayors from G20 cities have endorsed the 2021 Communiqué, including Paris, London, Los Angeles, Madrid, Moscow, Riyadh, Seoul, and Tokyo, as well as cities such as Delhi and Mumbai, which endorsed a U20 communiqué for the first time.

Local and regional governments called on the G20 leaders to guarantee the right to health for all by supporting strong public institutions and service provision, which are vital to the cohesion of our communities and to guaranteeing universal vaccine access equally for all; to to accelerate climate action ahead of COP26 by investing in halving global emissions by 2030 and shifting investments from fossil fuels to clean energy; and, finally, mayors are asking the G20 to increase equity and good governance, both by enabling cities to make the transition to a net zero economy, a just transition for all, as well as by protecting citizen’s digital rights.

The signatory local governments outline their vision for a new sustainable development paradigm and the road towards a resilient recovery from the global humanitarian crisis precipitated by the COVID-19 pandemic. The three axes of the Communiqué, which  was handed over to the G20 Presidency, represented by Italian Undersecretary of International Affairs Benedetto Della Vedova can be summarised as follows. The document can be found in its entirety here

The Urban20 Summit also counted on an interactive dialogue on People, Planet and Prosperity with representatives of the G20 Climate and Energy Track and the G20 Culture track and U20 Partners such as… the OECD, UITP, the Cities Coalition for Digital Rights, and the Culture 2030 Goal Campaign, who they all provided their contribution on the importance of the calls of the communiqué ahead of COP26 and how their work will amplify its messages, in particular in regards to the need for an equitable recovery.

Among the outcomes of the U20, it is expected to contribute to raise ambitions on the international stage, leading up to both the G20 Summit in October, as well as COP26  in Glasgow in November and other key international policy processes by bringing together some of the most ambitious leaders.

“U20 cities send a joint message to the G20: there is no recovery that is not green, just and local. Cities’ recommendations around the People, Planet and Prosperity priorities indicate to G20 governments that we can and want to help. Cities are the best allies to achieve the G20 ambitions as we host the majority of people, have proven to be seriously committed to a sustainable planet and are the beacons of innovation for future prosperity. We expect the G20 to value the role of cities in their proceedings particularly this year, at such a challenging as well as promising juncture in the history of humanity.”

– Giuseppe Sala, Mayor of Milan and U20 Co-Chair

“To create a resilient, green and equitable society must be our common post-pandemic objective. Cities are where the majority of people live, and Mayors are the most accountable to the citizens, being the closest level of Government to the people. The Italian Presidency of the G20 brought about the closest cooperation between cities and governments yet, and we shall keep on working together to achieve our common objectives. We call on the Italian Presidency to value the contribution U20 Cities give to the creation of a society that will be more inclusive and green.”

– Virginia Raggi, Mayor of Rome and U20 Co-Chair

“Bringing the voices of local and regional governments to the international arena is more important than ever. The vital role that they have played in protecting both our people and our planet through local public service provision has proven to be crucial. As co-convener of the Urban 20, and facilitator of the Global Taskforce, United Cities and Local Governments stands ready to ensure that the vision and experiences of cities impact policy at all levels.”

– Mohamed Boudra, President of UCLG, Mayor of Al-Hoceima, and President of the Moroccan Association of Mayors (AMPCC)