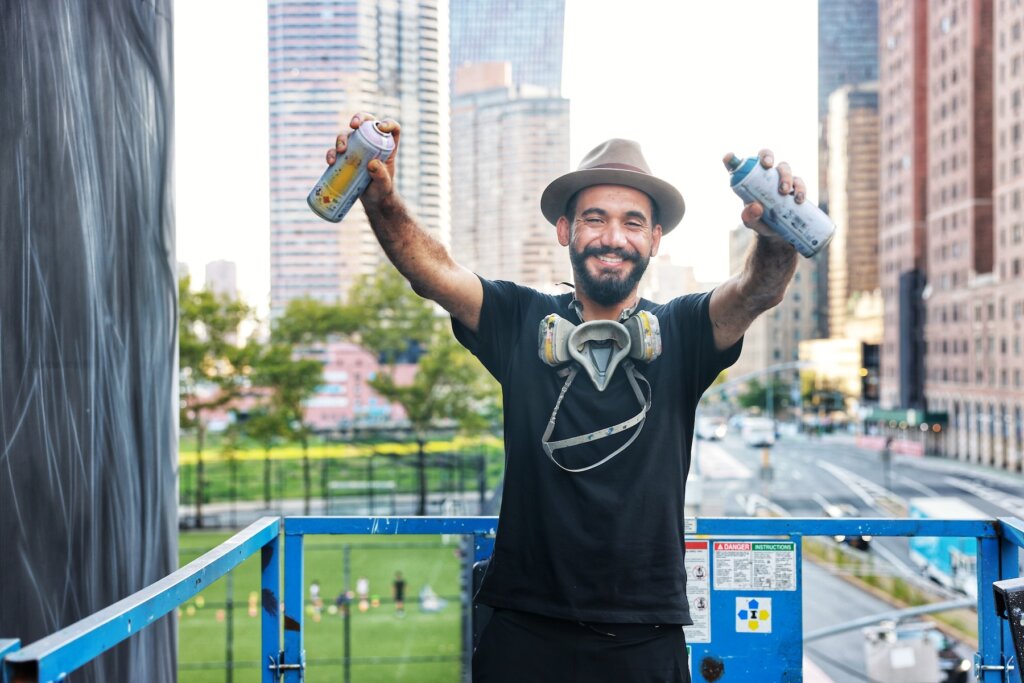 Eduardo Kobra works on a meaningful mural at the United Nations Headquarters in New York City. The unprecedented initiative of bringing street art to the UN’s wall was approved by the UN Committee, which recognised that Kobra’s art “is in line with the ideals of the United Nations.”

The wall is on E 42nd St & 1st Ave. According to Kobra, it is the first time the UN has authorised an artistic intervention on the external walls of its complex, which opened in 1952. (70 years ago!)

The mural comes at a significant moment, as the High-Level Week of the 77th General Assembly takes place at the UN from 19 to 26 September. Representatives from 193 countries, most world leaders, will discuss issues such as post-Covid reconstruction, the war in Ukraine, sustainability, and human rights.

The General Assembly begins under the theme, “A watershed moment: transformative solutions to interlocking challenges.”

The muralist’s work, which shows a father who hands over the planet to his daughter, will be finished on Thursday, 15 September. Kobra invites us to reflect on what future we want to leave for future generations.

“After receiving the invitation, I researched the theme of the General Assembly and realised that it converged with the issues that are increasingly being part of my work, especially regarding sustainability. Then, I created art for the mural where a father hands over the Earth to his daughter. In this way, I seek to contribute to the reflection on which planet we want to deliver to the next generations.” Kobra instagram

Kobra had the cultural support of The House of Arts. This contemporary business platform connects all forms of cultural manifestations and self-expression in art and fashion, mixing creators, painters, designers, visionaries and entrepreneurs.

The new mural at the UN is in perfect syntony with the themes used by the artist throughout his career, such as peace, tolerance, diversity, security, sustainable development, refugees, and human rights.

The invitation for this remarkable project came from the “Brazil Mission at the UN” as part of the celebration of the Bicentennial of the Independence of the Country.

“Throughout my career, there is no shortage of episodes in which I attribute success to perseverance and faith. And this work that I am doing now is further proof of that. Four years ago, I was walking in New York, and when I passed by the United Nations headquarters building, I immediately imagined how incredible it would be to work in this place. At the same moment, I laughed to myself: of course that would be impossible, it’s the facade of the UN! Only God could allow such a thing! Time passed and I received the invitation to do a work right here. It pays to have faith, perseverance, honesty, and integrity. Dream again, because God’s dreams will never die.” Kobra

Check out the final mural below …

Special thanks to our buddy in New York City, Ben, aka Just a Spectator, for the great photos capturing Kobra in action.

The post Street Artist Kobra invites us to reflect on what future we want to leave for future generations, NYC 2022 appeared first on GraffitiStreet.

Source: GraffitiStreet | From the Street RSS Feed
Link: Street Artist Kobra invites us to reflect on what future we want to leave for future generations, NYC 2022