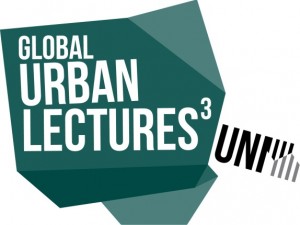 15 January, 2016 – The Global Urban Lecture Series is an initiative by UN-Habitat’s partnership with universities worldwide – UNI – to bring the knowledge and experiences of urban experts associated with the agency’s work to a wide audience. The series reaches not only the general public but also the 185 partner universities of UNI, and is currently being used both for personal further education purposes and professional training.

The series is free and consists of 15-minute lectures on urban topics related to the focus areas of UN-Habitat. Besides the video, each lecture includes a synopsis, a biography of the speaker, an MP3 file and links to additional reading material for further study. By the end of the second season, the Global Urban Lectures had reached 50,000 views, occupied 15 out of the top 20 spots on the UN-Habitat video list, and had been independently featured as ‘one of the best MOOCs on cities’, making it one of UN-Habitat’s most successful outreach initiatives.

The lectures are being shared across the globe, with a female-male viewer balance of 46:54; ages spanning 18 to 65+, with the largest group being 25-34 year olds, and the top ten viewing countries ranging from the US to India, Colombia and France. The series currently has 28 lectures and two trailers online, all found at www.unhabitat.org/urbanlectures.

We are now pleased to announce the launch of its third season, starting with:

“The federation model of community organisation” by Sheela Patel of Slum Dwellers International: Over the past two decades Slum Dwellers International have created a mechanism which serves to create a city-wide network of urban informal settlements with the intention of enabling dwellers to see themselves as part of a larger subsection of the city whose needs have been neglected and whose voice has to reach either the city or the national government. This has been done through a process called enumeration, through which the members collect data about informal settlements at city-level.

Find the video to Sheela Patel’s lecture below. Find both the video, mp3, synopsis, biography and additional reading materials in the full lecture package under www.unhabitat.org/urbanlectures.

The new season features lecturers discussing topics such as including gender in urban planning, transforming cities towards low-carbon resilience, affordable housing, geo-spatial technologies for slum mapping, global economic competitor and the uses of open data to transform slum upgrading process as well as transport systems. We welcome you to share the global urban lectures with your networks, you can find all the lectures at www.unhabitat.org/urbanlectures.