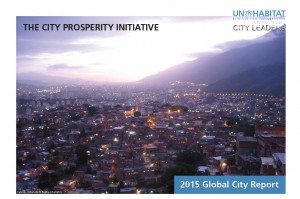 In 2012, UN-Habitat created a tool to measure the sustainability of cities. This tool known as The City Prosperity Index was accompanied by a conceptual matrix, the Wheel of Urban Prosperity. In 2013, UN- Habitat received numerous requests from local authorities and central governments to estimate their respective prosperity indexes. Mayors and other decision makers wanted to know how their cities feature in comparison with other cities. This included knowledge on how to improve ratings and measurements of cities towards the prosperity path, including gaining critical insights in to which programmes and policies work, and the possible impacts these actions may have.

As a result of these demands, UN-Habitat transformed the City Prosperity Index into a global initiative known as the City Prosperity Initiative. This initiative is both a metric and a policy dialogue, which offers cities from developed and developing countries the possibility to create indicators and baseline information often for the first time. It also serves to define targets and goals that can support the formulation of evidence-based policies, including the definitions of city-visions and long-term plans that are both ambitious, and measurable.

UN-Habitat’s City Prosperity Initiative (CPI) not only provides indices and measurements relevant to cities, it also enables city authorities, as well as local and national stakeholders, to identify opportunities and potential areas of intervention for their cities to become more prosperous.