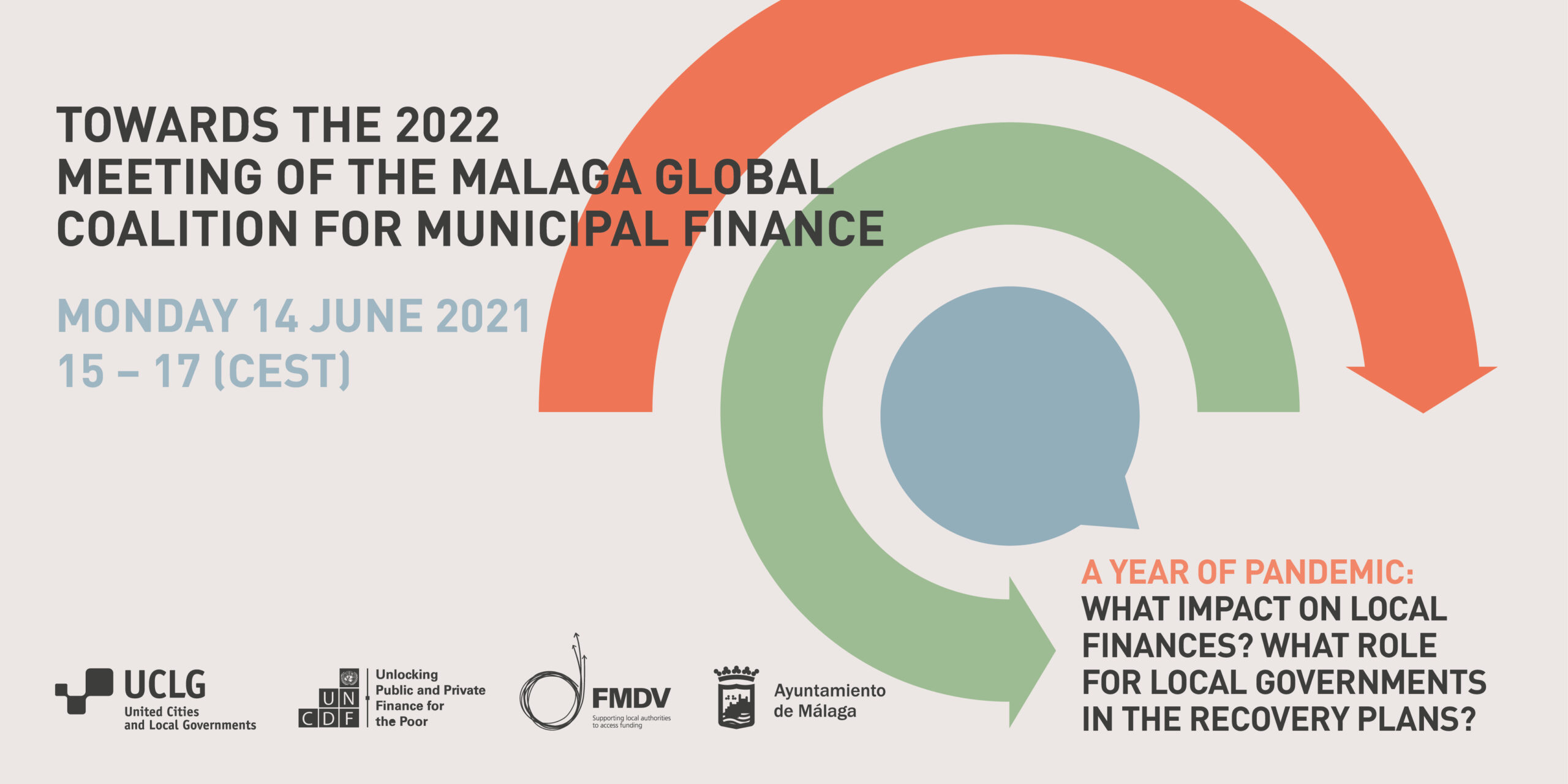 The session gathered up to 140 participants, and provided a space for cities, regions and their national and regional associations to discuss their experience in managing the financial constraints resulting from the pandemic. It was also an opportunity to share their positions and recommendations on their role in the definition and implementation of recovery plans and fiscal stimulus packages to build forward better.

The UCLG Secretary General, Emilia Saiz, the UNCDF Executive Secretary, Preeti Sinha, and the Mayor of Malaga, Francisco de la Torre Prados opened the session, stating that it was key to hear and learn from the experience of local and regional governments as we prepare for the next meeting of the Malaga Global Coalition for Municipal Finance. They emphasised how the COVID-19 pandemic had further stressed the need to accelerate the localisation of financing for public service and capital infrastructure in the post-COVID recovery. 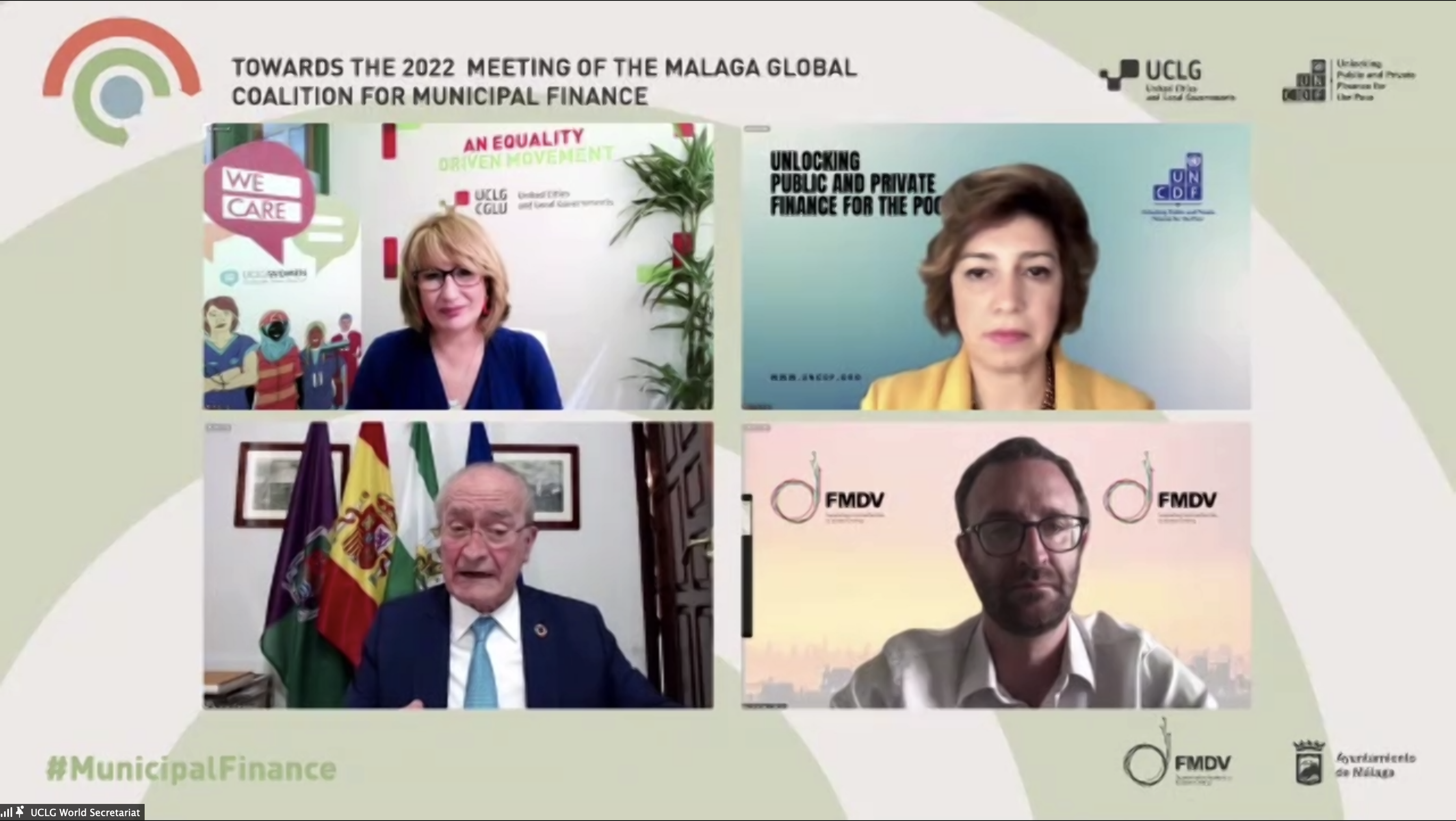 “We all knew that local service provision needed to have a different space in the international and national development agendas. During the pandemic, services were maintained because of local and regional governments. If public is back, we have to think of how to finance service provision that has suffered a cut in income and an increase in expenditure.” Emilia Saiz, UCLG Secretary General.

“As we gear up for the Malaga meeting in early 2022, it is critical to hear from cities and regions on how to sustain municipal finance for the recovery and in support of the global development agendas.” Preeti Sinha, UNCDF Executive Secretary

“The Coalition’s discussions in 2018-2019 will be enriched by the lessons we have learned in 2020-21. This pandemic is a reminder of the need to further advance decentralisation and promote adequate funding capacity at the local and regional level.” Francisco de la Torre Prados, Mayor of Granada 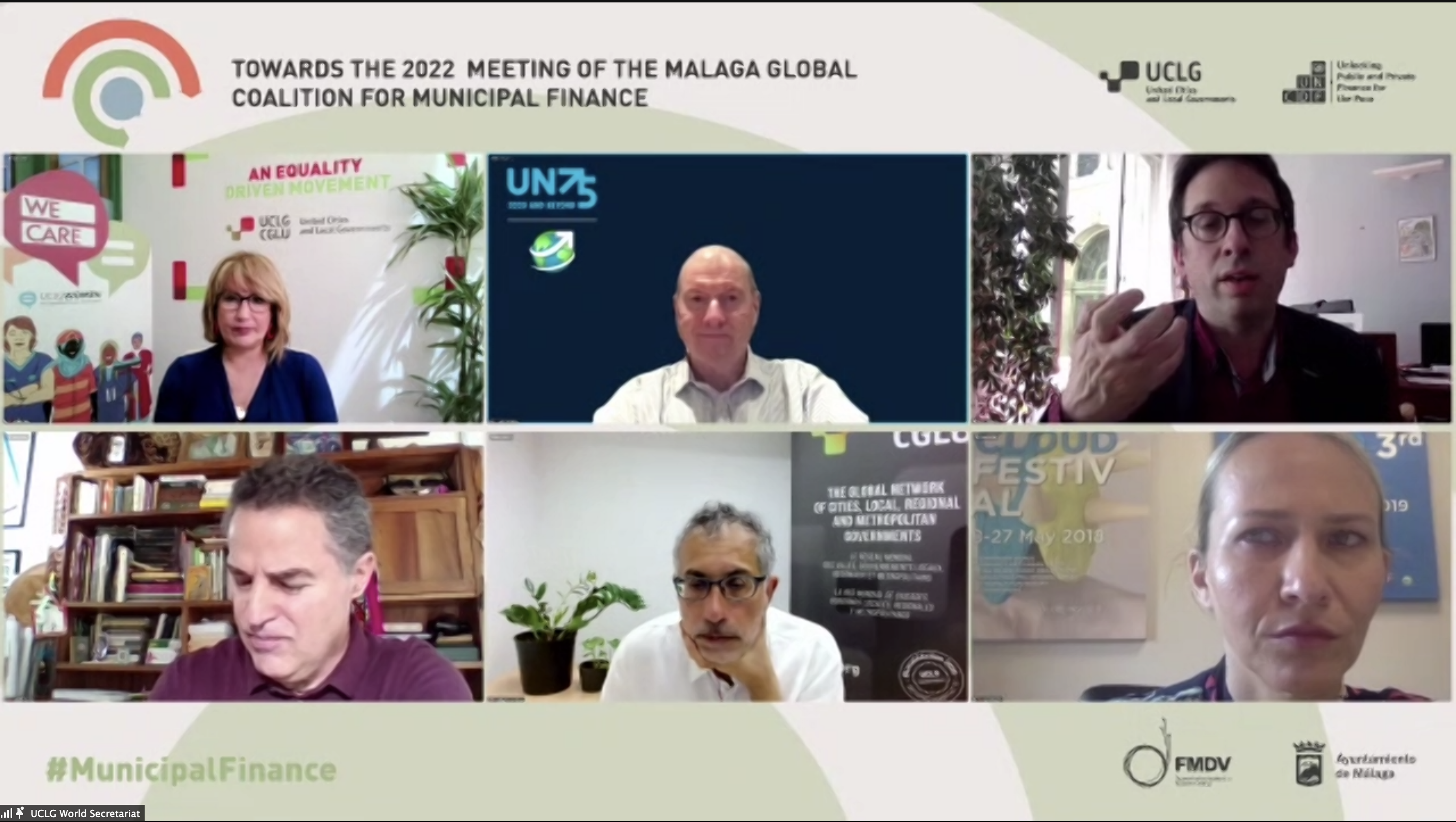 A first panel discussion moderated by Luc Aldon, Programme Manager at the FMDV, and Serge Allou, Technical Advisor on Local Finance at UCLG, gave the floor to elected representatives of cities and region to discuss their current financial challenges and priorities, and how they can be involved in the development of the financial recovery packages that are being set up at the national and regional levels. Paul Simondon, Deputy Mayor of Paris in charge of finances, Yvonne Aki-Sawyerr, Mayor of Freetown, Anuela Ristani, Deputy Mayor of Tirana, and Aníbal Gaviria, President of Cities Alliance, all pointed out the unprecedented scissor effect caused by the pandemic on the revenues and expenditures of local and regional governments (LRGs), both in the Global North and the Global South.

“No city is bullet proof because no matter how rich your city is, there are still limited resources to serve all the citizens.” Anuela Ristani, Deputy Mayor of Tirana

Panellists highlighted different strategies to address these financial constraints, including the creation of an economic stimulus plan (Paris), the establishment of solidarity mechanisms (Tirana), the deepening of property tax reform (Freetown), and a credit strategy to accelerate public investment (Antioquia). The risk of recentralisation of certain functions, as well as the limited consideration of LRGs in the definition and implementation of their country’s recovery plans, where they exist, were underlined by most speakers as important issues for the Malaga Coalition to consider. Equally important is the need to rebuild the local fiscal space and enhance LRGs’ direct access to financing.

“We see that there is no specific access for cities to the EU recovery plan. There is a lack of consideration for the role that cities can play in the economic recovery and ecological transition in the aftermath of the health crisis.” Paul Simondon, Deputy Mayor of Paris in charge of finances

“As city leaders, we need to be able to articulate how can we open up the fiscal space, how we build partnerships, where does the funding come from. It won’t work until we find a platform that effectively challenges the recentralisation of functions.” Yvonne Aki-Sawyerr, Mayor of Freetown

“We should promote joint work and foster diversification of regional and municipal sources of income to adapt to the new global realities, to identify which are the sources of income of the past that we are still relying on and which will be the sources of the future that we need to build on.” Aníbal Gaviria, President of Cities Alliance.

A second panel discussion moderated by Mathilde Penard, Local Finance officer at UCLG, brought together national and regional associations of LRGs to explore the supporting role they have played in helping LRGs cope with the impact of the pandemic, and raising the profile and priorities of their members in the negotiation processes around the development of recovery packages. Xolile George, CEO of the South African Local Government Association (SALGA), Clarence E. Anthony, CEO and Executive Director of the U.S. National League of Cities (NLC) and Frédéric Vallier, Secretary General of the Council of European Municipalities and Regions (CEMR) gave compelling accounts of how their respective associations have carried out intensive advocacy campaigns with national and regional institutions. In many instances, the participation in national councils, the use of fact-based materials and of the media have been instrumental in raising awareness of the need to provide their members with additional direct support to cope with the pandemic and beyond. 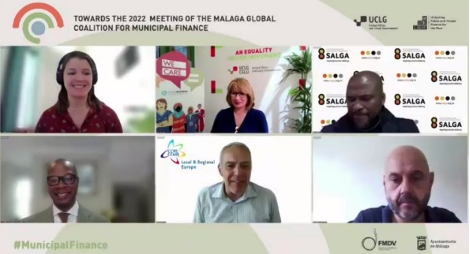 Discussions around the recovery plans, both at national and EU level, have also been identified by all panellists as an opportunity to rethink existing financing models in support of an increased recognition of the role of local and regional authorities in the provision of public services and in national recovery.

“Part of the recovery phase should entail the rethinking of national and global policies around financing for development, as well as enablers for municipalities to be flexible and agile enough to drive recovery.” Xolile George, CEO of SALGA

“For the first time in history of the U.S. national legislation, every town and village over 55,000 is provided with direct funds to overcome the effects of the pandemic. We’re hoping this formula will be used again because it’s the most powerful way to ensure recovery happens and rebuild our nation.”  Clarence E. Anthony, CEO and Executive Director of NLC

“We advocate in Europe for the recognition of local and regional authorities in the national recovery plans proposed in the framework of the EU Recovery and Resilience Plan. We are asking that in each EU Member State, national associations be consulted and that a monitoring tool be put in place to follow the redistribution of EU funds.” Frédéric Vallier, Secretary General of the CEMR

In their concluding remarks, Jean-François Habeau, Executive Director of the FMDV, and David Jackson, Director of Local Development Finance at UNCDF outlined the linkages between the issues raised during the session and those to be addressed at the upcoming meeting of the Malaga Coalition, including the need to rebuild/reshape the local fiscal space, establish new partnerships and increase capital flows for public infrastructure. These issues will be further debated in the autumn at a second preparatory meeting of the Malaga Coalition, that will bring together LRGs along with representatives of national governments and development partners.

Source: UCLG
Link: Cities, regions and their associations claim to play a major role in mobilising post-COVID stimulus funding ahead of the 2022 meeting of the Malaga Global Coalition