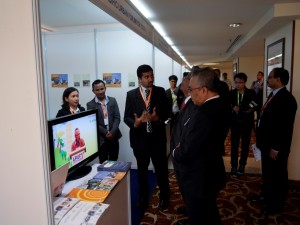 Melaka, 15 March 2016 – Deputy Prime Minister of Malaysia, Ahmad Zahid Hamidi, has reiterated the “need for integrated and inclusive urban resilient strategies”, and stated “to build resilient cities, we must start with people.” He made the comments at the second Asia Pacific Forum on Urban Resilience and Adaptation which took place in Melaka, Malaysia earlier this month. At the conference, organised by ICLEI, Local Governments for Sustainability, Abdul Rahman bin Dahlan, Malaysia’s Minister of Urban Wellbeing, Housing and Local Government, also welcomed participants to Kuala Lumper for the 9th World Urban Forum which they are hosting in 2018.

Mariko Sato, Chief UN-Habitat Bangkok emphasized at the high Level Segment and at Opening Ceremony ‘these global agreements will have no meaning unless they touch upon the lives of the ordinary people and in particular improve lives of the marginalized.”

At the meeting UN-Habitat organized a plenary session on ‘Youth and Urban Resilience’ in collaboration with the State Government of Melaka, Asian Development Bank and ICLEI, as well as the Asia-Pacific Youth Urban Forum (APUFY) Exhibition booth. The Plenary Panel focused on the contributions of young people to urban resilience, and engaged “youth icons” from across Asia and the Pacific. The plenary session highlighted the vital role young people play as catalysts of resilient and sustainable urban development in Asia and the Pacific.

Chief Minister for Melaka, Idris bin Hj. Haron, said: “Youth have a role in raising the ambition of governments to bring about a new climate change regime… Young People have increasingly demonstrated strong social and environmental awareness and are necessary to transform our societies towards a low-carbon and resilient future.” Alfrence Ingoa Fatai, Mayor of Honiara, the capital of the Solomon Islands, presented his vision of tangible development for young people. Anil Tuladhar from Nepal explained that youth can turn a crisis into an opportunity and help lead disaster response in urban areas. During the response to the 2015 Nepal Earthquake, Mr. Tuladhar identified a “strong feeling of national unity in the collective sentiment of the people”, when thousands of youth volunteered to help their local community and traditional settlements.

Resilience at all levels

Two representatives from the first Asia-Pacific Urban Youth Assembly at APUF-6 (APUFY), held last October in Jakarta, also offered perspectives.  Felicity Cain, a young architect from Australia stated that to involve youth in the new urban agenda, social resilience needs to be incorporated at all levels. Muhammad Rafi Al Hariri Nasution, a youth icon from Indonesia, said that with urban slum areas being the most vulnerable areas in cities, youth need to be involved “not just as tokens, but in policy making”.

Culminating in the “Melaka Call for Action” all participants of RCAP 2016 committed to extend support to youth, engaging them as stakeholders to achieve resilient and sustainable growth; encourage the involvement of youth to address existing and anticipated impacts of climate change; and create opportunities for youth to develop innovative ideas and solutions for transitioning to low carbon economies. Debates were further enriched by the plenary session, “Localizing SDGs”, organized by the UN’s Economic and Social Commission for Asia-Pacific and UN-Habitat, where youth speaker Savinda Ranathunga from Sri Lanka shared strategies in aligning youth to the SDGs, and “Resilience and Gender”, where Yato’ Maimunah, Mayor of Seberang Perai highlighted the effectiveness of gender budgeting in building resilience in her city.

The outcome of this youth plenary session building on APUFY provides a foundation for more inclusive policy to incorporate youth and young professionals into discussions of urban resilience on the road towards Habitat III in Quito in October, and the Ninth World Urban Forum to be held in Kuala Lumper in 2018.