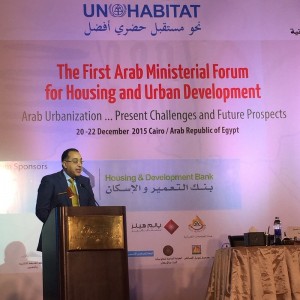 Cairo, 23 December 2015 – The Cairo Declaration on Housing, and Sustainable Urban Development in the Arab region was adopted on the last day of the first Arab Ministerial Forum for Housing and Urban Development.

For three days, housing and sustainable urban development issues have been debated at the Arab Ministerial Forum for Housing and Urban Development (AMFHUD). The forum was organized by the Egyptian Ministry of Housing, Utilities and Urban Communities, the League of Arab States and UN-Habitat. It attracted participation by 15 high level ministerial delegations, representatives of national and regional organisations, local government, academia, private sector and civil society.

The Egyptian Minister of Housing, Utilities and Urban Communities, Mr. Mostafa Madbouly, expressed his appreciation for the contributions from the participants from across the Arab region to the discussions at the forum. Challenges, opportunities and best practices were debated at 16 thematic sessions. The recommendations from AFMHUD will be important for the urban development in the Arab region. These recommendations include promotion of decentralisation and financial independence of municipalities, modernisation of national urban policies and strategies as well as integrated policies to promote social inclusion and reduce poverty gaps. 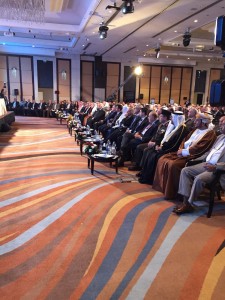 The Cairo Declaration on Housing and Sustainable Urban Development calls upon the Arab countries to formulate national plans in order to contribute to achieving the goals of sustainable development. In addition, it promotes the establishment of a national committee to follow up on all the relevant issues to sustainable urban development, gathering all government agencies concerned with urban development, the private sector and other stakeholders. The Cairo Declaration also confirms the interest and commitment in the Arab region towards the New Urban Agenda as the outcome of Habitat III, putting human beings at the centre. UN-Habitat was invited to support the efforts of AMFHUD. The declaration recognises UN-Habitat as a regional leading body entrusted to technically support the formulation and implementation of policies and programmes at the Arab regional level.

“Good urbanisation does not come by chance, but by human design.” Dr. Joan Clos, Executive Director of UN-Habitat, stated this at the closing of AFMHUD. The Arab region has experienced both a significant population growth and an increase in the urbanization rates with 56% of its citizens living in urban areas. Dr. Clos said that “there is a huge opportunity for the Arab States to accelerate the New Urban Agenda by sharing your experiences, policies and legislation.” Dr. Clos also commended the adoption of the Regional Strategy on Housing and Sustainable Urbanization as a very important commitment to the implementation of the Sustainable Development Goals, particularly SDG 11, Habitat III and the New Urban Agenda by the Arab states.