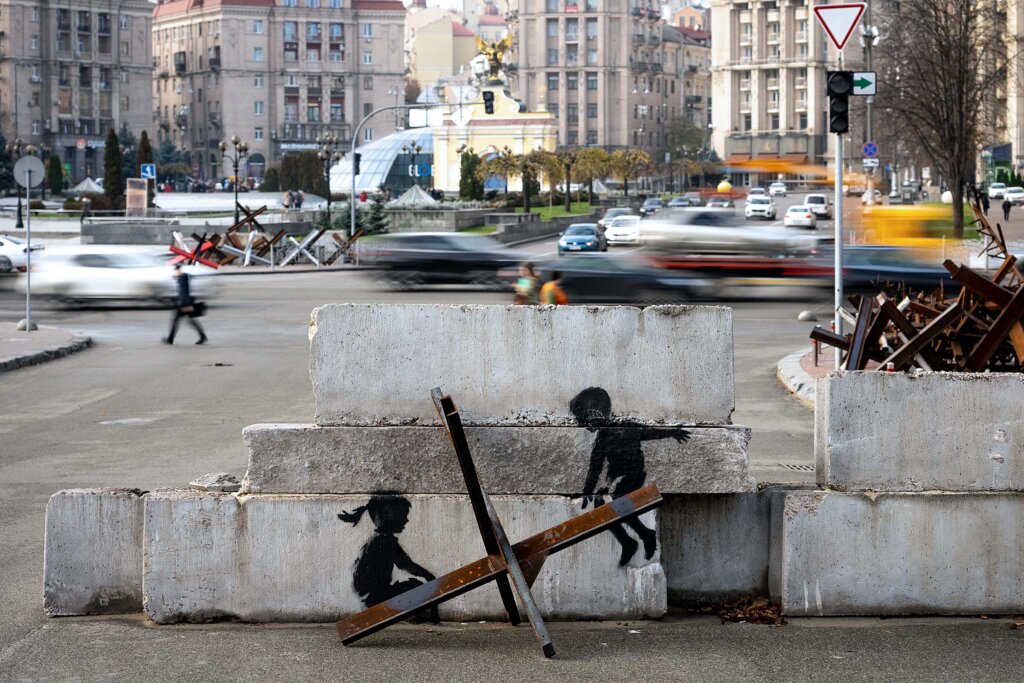 Street artists worldwide are paying tributes to Ukraine amid Putin’s invasion and showing their support for Ukraine. The invasion on 24th February 2022 has been widely condemned internationally as an act of aggression and has triggered Europe’s largest refugee crisis since World War II. A series of seven stencil murals by Banksy has appeared on structures in Kyiv and its suburbs in recent days in solidarity with the people of Ukraine.

At the start of November 2022, British street artist Banksy visits Ukraine’s capital Kyiv. The first stencil from Banksy drew global attention to his visit to Maidan Nezalezhnosti/ Independence Square. The stencil is of two children playing on a ‘seesaw’ on concrete barricades. The metal tank trap barriers perform part of the piece when viewed from a particular angle. A recent statement by UNICEF Executive Director Catherine Russell states, “At least 972 children in Ukraine have been killed or injured by violence since the war escalated nearly six months ago, an average of over five children killed or injured each day. And these are just the figures the UN has been able to verify. We believe the true number to be much higher.”

The second image to gain attention was a young child in a judo outfit dropping his component to the floor. The judo theme has links to Vladimir Putin. The black-belt Russian president held the role of honorary president of the federation but has since been dropped by the International Judo Federation in light of the ongoing war conflict in Ukraine. The stencil can be found on a damaged facade in Borodyanka in Kyiv Region, Ukraine. Russian airstrikes hit the Borodyanka region hard in the first few weeks of the conflict.

A woman can be seen in a leotard and a neck brace, waving a ribbon on the wall of a destroyed building in Irpin. The dancer with the ribbon may be a nod to the painting by Hilaire-Germain-Edgar Degas titled ‘Russian Dancers’. After a recent outcry from Ukrainians, London’s National Gallery changed the name of the artwork to ‘Ukrainian Dancers‘. Created around 1899, the dancers’ hair is adorned with blue and yellow ribbons, the national colours of Ukraine.

Another stencil in Borodyanka is a woman gymnast in a leotard performing a handstand on another destroyed building. Ukrainian gymnast Marharyta Kozlovska has used her World Championship platform to call for an end to the conflict tearing apart her homeland. Kozlovska and her teammates saw October’s national championships in Kyiv end a day early due to Russian air strikes and have had to use other nations’ facilities to prepare for the Liverpool 2022 World Artistic Gymnastics Championships. Held in the United Kingdom at the Liverpool Arena from 29th October to 6th November 2022. Due to the Russian invasion of Ukraine, athletes representing the Russian Federation and Belarus were banned from competing at these championships.

A destroyed residential building in the Gorenka village reveals a bearded gentleman enjoying a hot bubble bath. More than one thousand residential buildings in Gorenka have been destroyed due to the invasion. Also, from the beginning of the war, power lines were damaged by Russian missiles and drone strikes. Ukrainian people are helpless without heat as freezing winter fast approaches. Recently the Ukrainian Red Cross has restored power lines in the Gorenka, Kyiv region.

A stencil of a lady in her hair rollers and dressing gown wearing a gas mask and holding a fire extinguisher appears on the wall of a destroyed residential building in the Hostomel town, which was heavily damaged by fighting at the beginning of the Russian invasion of Ukraine.

A ‘graffiti cock and balls’ is being fired off a Russian ‘Z’ military truck. The imagery concentrates your attention on ego and rational thought.

Banksy has released a video ‘In solidarity with the people of Ukraine‘.

What are your ideas concerning the artworks and their messages? Drop your comments in the link below …