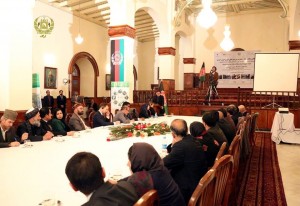 Kabul, Afghanistan, February 08 2016 – During 1-5 February 2016 more than 350 civil society representatives and community members from the five major Afghan cities – Kabul, Herat, Mazar-e-Sharif, Jalalabad and Kandahar – were in Kabul to take part in Inclusive Afghan Cities Week. During the week a series of events took place to promote inclusive and gender sensitive urban development, with a particular focus on the role of urban Community Development Councils (CDCs) as key entities in the sub-national governance structure.

As part of the Community-Led Urban Infrastructure Programme (CLUIP), representatives from CDCs shared experiences from implementing this Japanese-funded programme. The CLUIP exchange aimed to share information and experiences, create common understanding and develop new approaches and relationships as foundation for future projects. During the field visit, male and female CDC members discussed lessons learnt and challenges in their provinces through field visits, inauguration of female projects and workshops.

On 2 February all 350 CDC members were invited to the President’s Palace to present their achievements and challenges in the projects to H.E. President Ghani. Both female and male CDC members presented their experiences, proposals for future development and expectations of the Government. H.E. President Ashraf Ghani addressed the CDCs and expressed his appreciation for their hard work and solidarity. He particularly addressed the need for women to take a lead role in the development of their cities and in building the country. 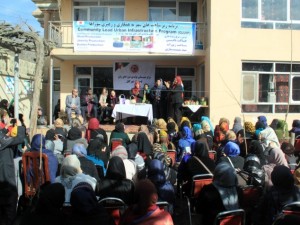 On 4 February, a National Urban Citizen Consultation on the Urban National Priority Programme (U-NPP) was held. The U-NPP draft was presented to the civil society and CDC representatives by the Government. During the day participants contributed with their priorities for and suggestions to improve the draft U-NPP.

The U-NPP is being developed as part of the Future of Afghan Cities (FOAC) programme, supported by the Governments of Australia and the UK. The U-NPP is drawing on the recent State of Afghan Cities 2015 Report, which was launched by H.E. President Ghani and highlighted the need for an improved national framework and policy environment for urban development.

The CDC participants expressed their appreciation for the opportunity to contribute to this national policy initiative. Many noted that they had never been consulted on such matters before and this provided a momentous opportunity to contribute with grassroots ideas and priorities, as well as addressing the regional variations and needs. Hamid Jalil, Deputy Minister for Urban Development, noted that the Government values the inputs and contributions from citizens and is making serious attempts to develop the U-NPP in a more participatory way, which should promote national ownership and alignment with citizens’ priorities.

UN-Habitat as a enabler of improved citizen participation

UN-Habitat has been active in Afghanistan for more than two decades. It is currently implementing a portfolio of programmes that seek to strengthen human settlements in Afghanistan and promote sustainable urban development. This is especially important given the considerable challenges urbanisation poses in the coming decades. The CLUIP programme is a one-year programme funded by the Embassy of Japan and aims at securing and stabilizing urban areas across five cities by responding to the urgent needs of recently displaced people, demobilized combatants and returnees through community empowerment, enhancing their access to basic services and improving their livelihoods, thereby enabling them to live in dignity.

The Future of Afghan Cities Programme (FoAC) is supporting the Government with the development of the U-NPP, which will outline a clear national framework of priorities and interventions in the coming decade in the urban sector. It is being developed collaboratively with relevant Ministries and departments (including MUDA, IDLG/GDMA, Kabul Municipality, ARAZI), and should provide opportunities for municipalities, civil society and the private sector to engage and contribute to promote national ownership.