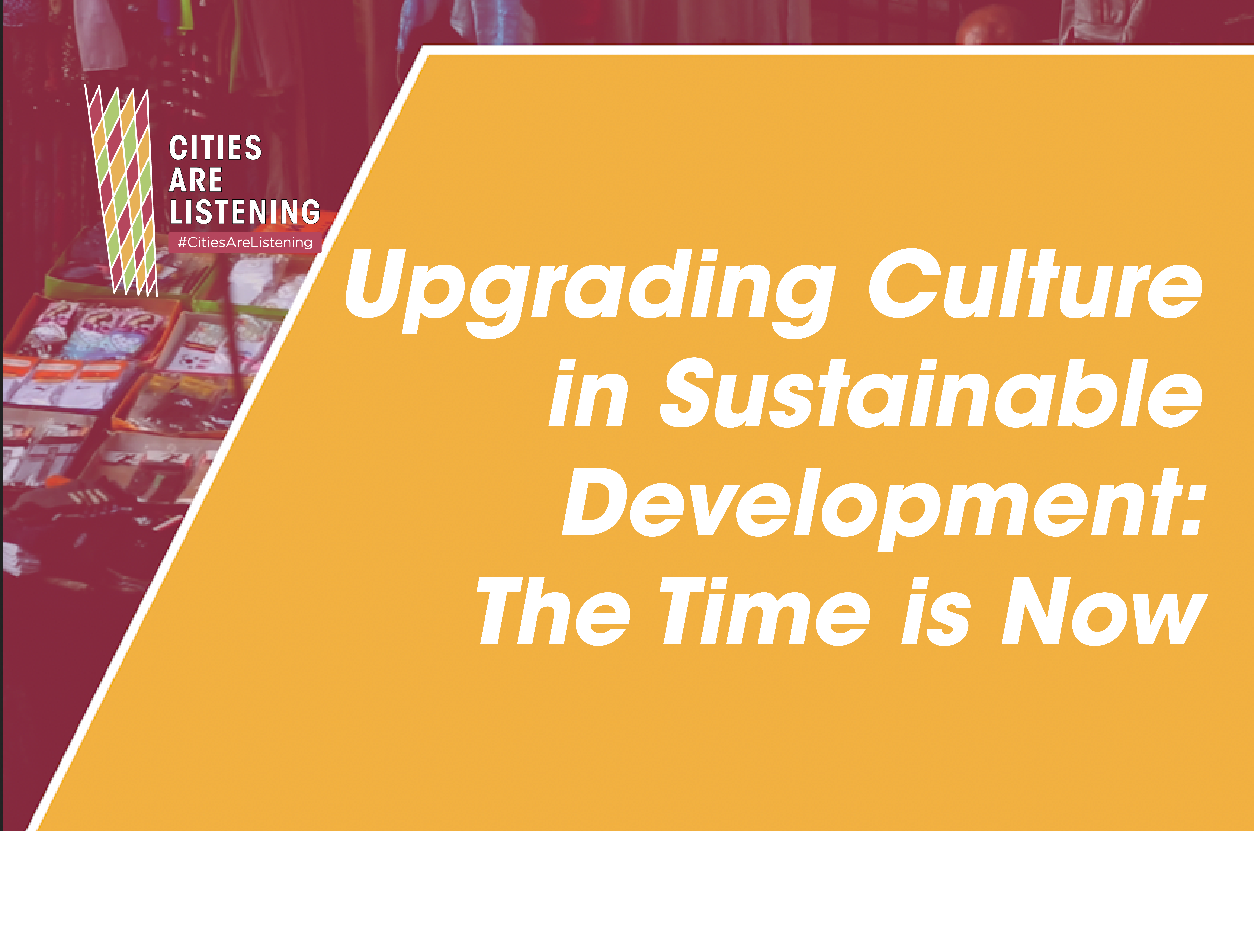 The session entitled “Upgrading Culture in Sustainable Development: The Time is Now” took place on 20 April. It gathered mayors, councillors and local elected representatives from cities from across the planet and representatives from six global civil society cultural organisations. Together they discussed the need to reinforce actions and advocacy to defend and pledge for culture to be upgraded to its adequate value regarding development at the local level.

Emilia Sáiz, Secretary General of UCLG, welcomed participants and provided context on how right to culture and the place of culture in development were shaping UCLG´s policies and strategies.  She highlighted that culture does not only shape the way people live everywhere but also an essential factor in the defining the aspirations and dreams of the people and as such a critical component of the UCLG Pact for the Future. “We have learnt that there are strong avenues that link culture with the challenges that humanity is facing. We see it as an important antidote for the negative effects of the current crisis” She further celebrated the inclusion of culture in the conversations at G20 level.

Tunç Soyer, Mayor of Izmir, invited cultural actors and constituencies to the 4th UCLG Culture Summit, to be organised in Izmir from the 9th-11th  September 2021, describing the Summit as an opportunity to connect culture and urban resilience and promote creativity and innovation through heritage, diversity and knowledge; keys for local sustainable development. “We will exchange about cultural policies and we will promote culture as the fourth pillar of development, and a cornerstone for global solidarity.”

Luca Trifone, Director of International Relations of Rome, introduced the Rome Charter on the Right to Participate in Cultural Life as ”the most compelling narrative on cultural rights”.  He emphasised the important role given to culture in the G20 process under the Italian Presidency and celebrated that the U20, co-chaired by Rome and Milan, fully acknowledges culture in its communiqué as an essential part of city life.  “G20 will be an important milestone in the promotion of culture in sustainable development and one that Rome is happy to articulate with UCLG and Urban 20”. 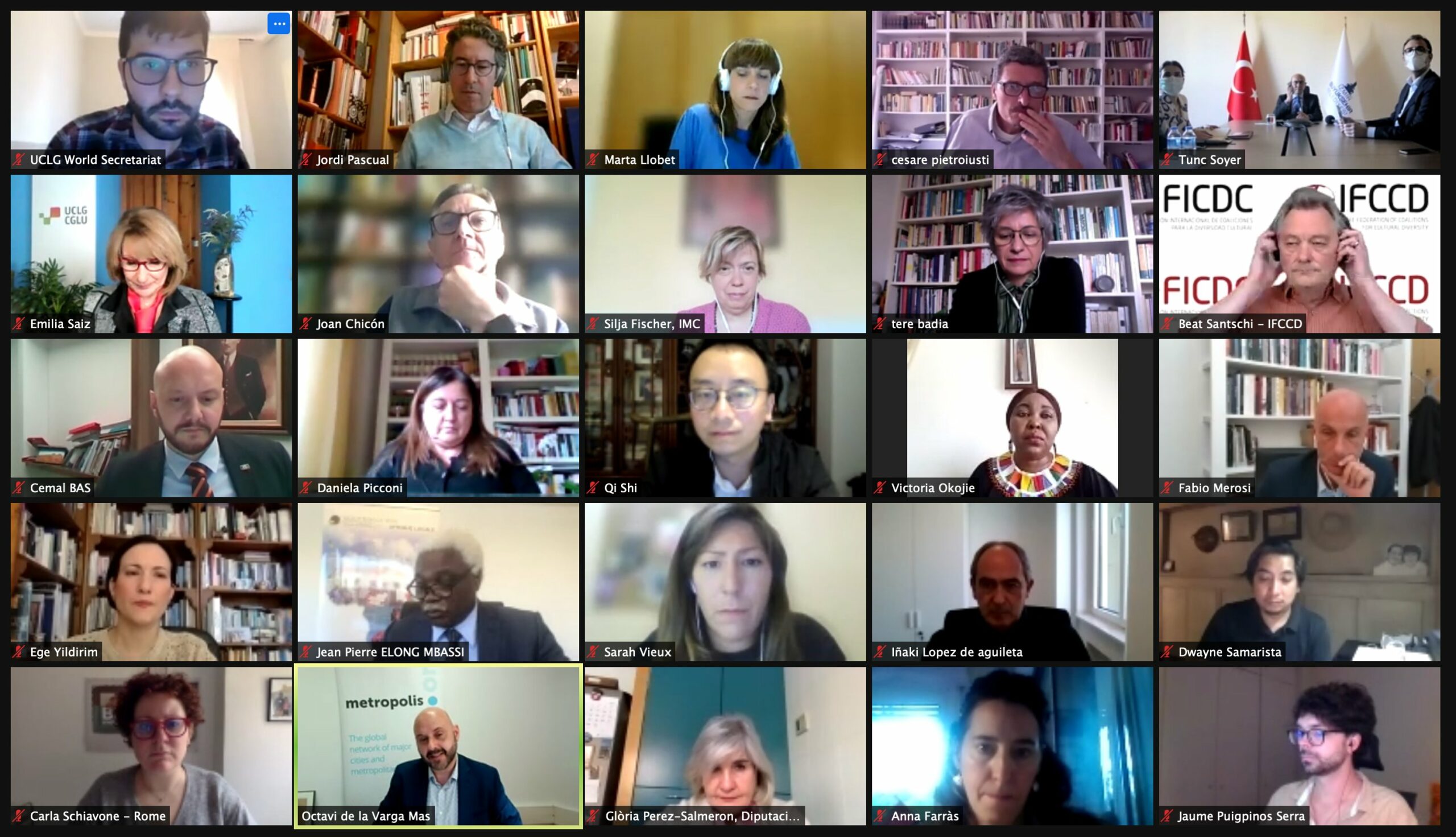 Octavi de la Varga, Secretary General of Metropolis introduced a panel which offered the members of the #culture2030goal campaign the opportunity to present their vision and challenges, including regarding the pandemic and the recovery of the crisis. Nupur Prothi, Board member of the International Council on Monuments and Sites (ICOMOS), emphasised the need to scale up intentions regarding urban challenges and the role of culture and knowledge in transformative development. Beat Santschi, President of the International Federation of Coalitions for Cultural Diversity (IFCCD) highlighted that although culture has been key in coping with the current challenges, cultural actors are the first to suffer the effects of the crisis and will be among the last to return to the better conditions. On another hand, Victoria Okojie, Nigerian Library Association, and Board member of the International Federation of Library Associations and Institutions (IFLA), stressed the need to be more inclusive and imaginative in order to ensure that the Pact for the Future can deliver on commitments of the Rome Charter and the UN 2030 Agenda. Silja Fisher, Secretary General of International Music Council (IMC), recalled that culture can have a transformative role in local public policies and global debates, which is the backbone of the #culture2030goal movement. Pierre Claver Mabiala, President of Arterial Network, reaffirmed the increasing interest to work on the cultural dimension of development by governments in Africa and the need to bring culture closer to the populations. Finally, Tere Badia, Secretary General of Culture Action Europe, warned that cultural diversity and cultural rights are at stake, and that it is necessary to rethink holistic strategies that include a strong cultural dimension towards multidisciplinary and multilevel responses.

As a comment to these messages, the Minister for Culture of the Autonomous City of Buenos Aires, Enrique Avogadro, took the floor and confirmed that at city level, cultural ecosystems are fragile and need a response that goes beyond local solutions, such as economic help or digitalisation.  Karima Bennoune, former UN Special Rapporteur in the field of Cultural Rights, also emphasised that international law requires actions to lead to the cultural renewal as an essential component to build back better, since culture represents a response to many challenges, from climate change to gender equality, inclusive societies or covid-19, and many more. “We must remember, as the Rome Charter says, culture sometimes is the solution, and sometimes it can help to find the solutions. Many say that without culture they would not have survived the lockdowns, but without appropriate measures culture will not survive.”

Cesare Pietroiusti, President of Azienda Speciale Palaexpo introduced the Rome Charter in the second part of the session stressing that the purpose of arts and culture is not only to offer beauty, but also to look at things differently, giving critical meaning and new awareness to our common acts in daily life. He then gave the floor to Sara Alberani and Valerio Del Baglivo, curators of the Orchestras of Transformation, who briefly explained the aim or their initiative and introduced two artists, Daniel Fernández Pascual and Alon Schwabe, who presented the Climavore project as part of the Cooking Sections initiative, which aims at raising awareness on the role of cities and cultural institutions in the mitigation and adaptation to the climate crisis.

The last panel, devoted to reflecting on the contribution of the Rome Charter to the UCLG Pact for the Future, was facilitated by the Secretary General of UCLG Africa, Jean-Pierre Elong Mbassi, who recalled how cities from across the world show us how to translate the Rome Charter five cultural capabilities – discover, create, share, enjoy and protect – into concrete policies and actions, and how critical it is for the UCLG Pact for the Future. He then invited Catarina Vaz-Pinto, Councillor for Culture of Lisbon to take the floor, who recalled that placing culture at the centre of recovery is a way to put the Rome Charter and cultural rights into practice, as a major contribution to what cities daily achieve in terms of policy. Following, Mohamed Sadiki, Mayor of Rabat, stressed that many local actions are priorities of the UN 2030 Agenda and of the New Urban Agenda as they contribute to reinforce cultural exchange and improve living together with communities. Vannesa Bohórquez, Secretary on Culture from Mexico City, added that in times where we need to recover biodiversity, prevent abusive consumerism and face climate change, initiatives like the Rome Charter are critical to ensure the transformative power of culture is part of the response. On his side, Gonzalo Olabarría, Secretary for culture from Bilbao, reaffirmed the claim for culture as a right and a value in itself and stated that the Charter of Rome represents a major step to promote the commitment from cities and local governments to diversity and democratic values.

Jordi Pascual, Coordinator of UCLG Committee on Culture thanked participants and emphasised the urgency of putting the cultural perspective in public local policies. The call was echoed by the UCLG Secretary General that invited partners and members to call for more investment in culture and for a strong space for culture in the recovery plans.

The results of this Cities Are Listening will contribute to shaping the work of UCLG in the #culture2030goal campaign and the actions of the Culture Committee towards the Izmir Summit.

Source: UCLG
Link: The time has come for culture to have a real place at the table of decision-making on the Future of Humanity