The session of Local and Regional Governments in the framework of the Generation Equality Forum “Cities and territories at the forefront of inclusive recovery: Taking stock 25 years after Beijing” addressed how the feminist movement has evolved and the next steps to ensure full inclusion of women in all parts of life.

José Alfonso Suárez del Real, Secretary of Government of Mexico City, welcomed participants to the meeting, highlighting how gender equality and equal opportunities were “at the core of the priorities of Mexico City” and commending UCLG as a network, arguing that “the great advocacy effort of UCLG on gender equality has been critical to bring us today here”. 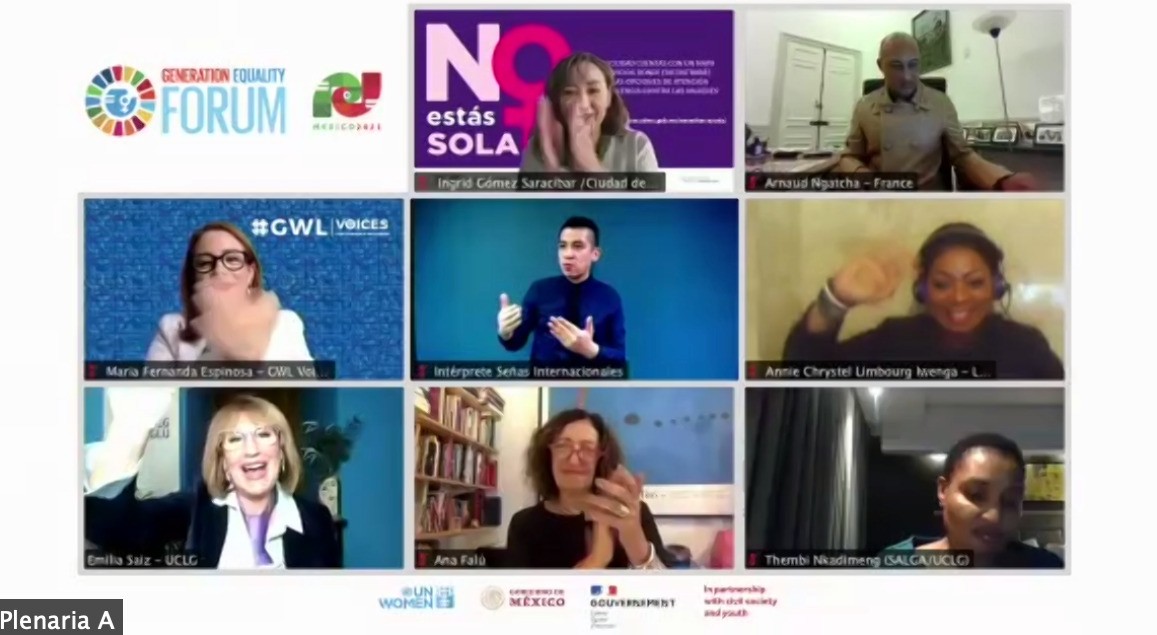 Emilia Saiz, UCLG Secretary General, argued how Generation Equality is an inflection point in arguing that equality is no longer a choice, but a necessary element for the recovery, and argued that women can bring to the table new policymaking and municipalism to the international, national, regional and local stages and how local governments can be a catalyst for women participation and feminist policymaking.

María Fernanda Espinosa, UCLG-UBUNTU Advisor, Member of the Group of Women Leaders – Voices for Change and Inclusion and President of the 73rd UN General Assembly provided an inaugural message , highlighting the three key words that define the forum: action, inclusion, and co-creation, and argued that calls around equality have not been translated into actions or policies.

“The role of local governments and feminist municipalism provides us with great hope. They are a laboratory for improving democracy, building less unequal societies and redefining the value of the public sphere”. María Fernanda Espinosa, UCLG-UBUNTU Advisor

Ingrid Gómez Saracíbar, Secretary for gender equality of Mexico City reiterated the city’s commitment to gender equality and generation equality. She addressed how the local government was working towards generating a “city of rights” that worked to end discrimination and eradicating violence, to ensure it is an inclusive city for women and girls,

“Without considering women’s needs and challenges, we cannot talk about a project of inclusion of the city. Achieving the full autonomy of women and girls is fundamental, and violence is the biggest obstacle.” Ingrid Gómez Saracíbar, Secretary for gender equality of Mexico City

Arnaud Ngatcha, vice mayor of Paris, argued the importance of men undertaking their role in the feminist struggle as a means to drive equality, and laid out the efforts of Paris in ensuring gender equality among its cabinet and its public work service.

“Women in politics face many obstacles, both in reaching office and once in office. Social norms and discrimination permeate all stages of public life. There is a need to strengthen the place of women in debates, including by strengthening the creation of caucuses.” Arnaud Ngatcha, vice mayor of Paris,

Carolina Cosse, Mayor of Montevideo and incoming UCLG Vice-President for Latin America reminded how the pandemic has increased the gaps and shown us the structural problems of our society that persist. She called on the need promote women in decision making, arguing that promoting women’s participation is a tool to ensure equality and overcome stereotypes and social norms that hold societies back.

“Generation Equality has to be a non-stop task, inviting us to look into every corner of our society, and to push for gender equality.” Carolina Cosse, Mayor of Montevideo and incoming UCLG Vice-President for Latin Americ

Annie Chrystel Limbourg Iwenga, Deputy Mayor of Libreville praised the process of the Forum Generation Equality, arguing that the recommendations of the Forum will accelerate the permanent work to build for equality between women and men, and argued for the need to strengthen ties between municipal governments and development partners to ensure financing is gendered.

Ana Falú, UCLG UBUNTU advisor on gender, argued that care work has been put at the centre in the times of the pandemic, and called on the need to feminize women and acknowledge the (often unfairly paid) work of care workers and women in the informal work market, who have been more affected by the pandemic.

Panelists also argued for the linkages between gender equality and the environmental agenda, with Paris highlighting how their upcoming conference on biodiversity would also include a roundtable on the role of women; and Mexico City calling for acknowledging how climate change will affect men and women differently and, in particular, women from more precarious backgrounds.The session of Local and Regional Governments in the framework of the Generation Equality Forum “Cities and territories at the forefront of inclusive recovery: Taking stock 25 years after Beijing” addressed how the feminist movement has evolved and the next steps to ensure full inclusion of women in all parts of life.

Source: UCLG
Link: The Feminist Municipal Movement takes stock of the Beijing Process at the Generation Equality Forum in Mexico