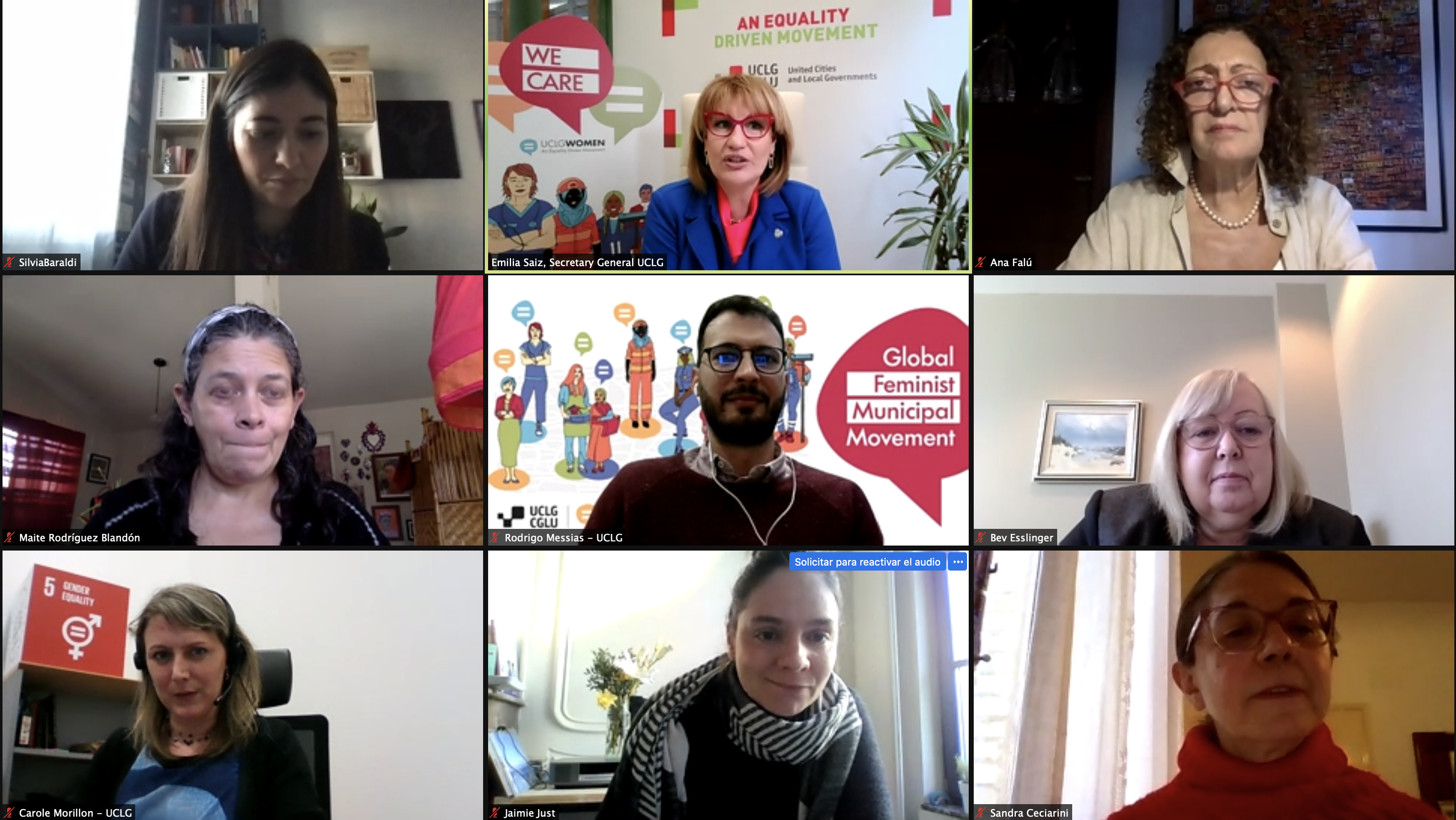 The session was organised in the framework of the NGO CSW Forum on Tuesday 23 March 2021 and gathered women local representatives from different regions of the world and civil society partners. The session discussed the crucial need to share responsibility and build stronger alliances that promote and enable the transformative policy-making we need to achieve equality.

Emilia Saiz, Secretary General of UCLG, recalled that the challenges the world is facing today are too large for any single sphere of government and that the global municipalist movement is looking for transformation and new partnerships in order to refine the new normality that should emerge at the recovery. The new normal need to be sustainable, more inclusive and more democratic. She also recalled that the quest for equality cannot be driven by individuals alone.  It goes hand in hand with other critical topics, such as health, housing or the ecological transition which are very much in the hand of governments. “We need to push for a new World Conference on Women. The Generation Equality Forum is an important mobilisation, but we cannot detach it from the debate of the States. Governments have to commit themselves, it is not just an individual responsibility.”

Maite Rodriguez Blandón, Coordinator of the Women and Habitat Latin American Network, highlighted that this CSW is marking how policies will be shaped in the future and the the issue of inequalities needs to be addressed more effectively, including gender-based discrimination regarding the division of work and our roles in society and decision-making. She also stressed the need to map and enhance territorial needs and assets in order to facilitate concrete implementation at the local level. Ana Falu, UCLG-UBUNTU advisor, called to take the crisis as an opportunity to show and promote women’s leadership and recognize them as powerful political subjects. She also stressed the need to create new alliances and partnerships aiming at supporting the elaboration of an inclusive, multi-stakeholder strategy in order to advance equality and rights towards better and more democratic societies.

Lluïsa Moret, Mayor of Sant Boi de Llobregat and president of the Area of Social Cohesion, Citizenship and Welfare of the Barcelona Provincial Council, underlined the importance of fostering the inter-institutional relations between governments at all levels in order to avoid populism, discriminatory models and backlashes to gender equality, highlighting the urgency in reversing the impacts of the crisis on women. She highlighted, in particular, public health and care systems, home office regulations, and the risk of women’s exclusion from new developing sectors, especially regarding digitalization. Bev Esslinger, Councillor, City of Edmonton, and from the Federation of Canadian Municipalities (FCM), reminded that a smart recovery must also strengthen our institutions and systems and pointed out the need to reinforce gender-sensitive policies to ensure the resilience of humankind, as society, and to engage by bringing an equality lens in all agendas, policies and programming, particularly around climate efforts and towards carbon neutrality. Aminata Diallo, former member of parliament and special advisor to the Mayor of Dakar on gender and childhood, mentioned the need for strong and sustained citizenship and gender policies aiming at protecting human rights as a prerequisite for development. She stressed child care and protection as a very important issue to take in account, especially in Africa, as it mostly falls on women, emphasizing city programmes in Dakar to assist children in street situations. Silvia Baraldi, Councillor of Legnago, Chair of CEMR Standing Committee on Gender Equality, highlighted the urgent need for concrete implementation, by creating adequate and scaled structures and mechanisms that can help dealing with gender-based inequalities, discrimination and violence, either in the public or private sphere, as the example of their platform to support women who suffered violence.

The open debate focussed on how gender-based approaches are central to the decisions on urban development and to influence leaders to collect data and allocate budgets; the need for local governments to engage into building new narratives for transformative change and to expand gender equality as a priority outside our ecosystem; the need to tackle the issue of affordable housing in order for women to avoid precarity and have a place, space and access to the right to the city; the need to keep transit and mobility open, so that women can move and have active and/or decisive roles in the society; among others.

The dialogue highlighted the need to acknowledge the change that was taking place and applauded the progress made to seek not only equality but also transformation of policies driven by a new way of doing politics through the feminist lens. They acknowledged the need to include LGBTQI perpectives and rights in those approaches. They reinforced the notion that in order to advance in equaility, specific key triggers of inequality such as violence, housing and unpaid work, but also the political participation of women were critical. While acknowledging the risk of “preaching to the quire” the value of women caucuses and support groups was confirmed as key drivers of change and inspiration.

For UCLG, the alliance between the constituency of Local and Regional Governments and civil society is fundamental to enable co-construction of the new pact for the future. At the international level, it will continue to be fostered this alliance at core of the global feminist municipal movement, and towards Generation Equality Forum