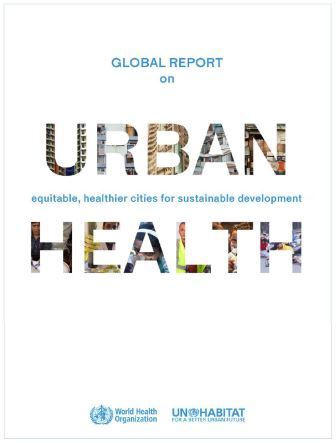 31 March 2016, Kobe, Geneva – New data on the health of city-dwellers in almost 100 countries show that as the world’s urban population continues to grow, health inequities – especially between the richest and poorest urban populations – are a persistent challenge, according to a report by the World Health Organization (WHO) and the United Nations Human Settlements Programme (UN-Habitat).

About 3.7 billion people live in cities today. A further 1 billion people will be added by 2030, with 90 per cent of the growth being in low- and middle-income countries. This intensifies the need to  realize the Sustainable Development Goal (SDG) target of ensuring universal health coverage (UHC): that all people obtain the health services they need without suffering financial hardship when paying for them, by 2030.

The report finds that in 79 low- and middle-income countries, children in the poorest one fifth of urban households are twice as likely on average to die before their fifth birthday compared with children in the richest fifth. In nearly 9 of 10 countries for which comparable data was available, the urban poor did not achieve the Millennium Development Goal target for reducing under-five mortality.

The report emphasizes the urgency of addressing health disparities and their determinants in cities as countries strive to achieve the SDGs and  identifies  innovative ways to  achieve UHC that are emerging in such diverse cities  as  Guangzhou and Lagos,  Lima and San Francisco, among  many others.

“There is an urgent need to identify and reduce health inequities, particularly for the most vulnerable populations, such as the nearly 1 billion people living in urban slums or informal settlements today,” said Dr Marie-Paule Kieny, WHO Assistant-Director General for Health Systems and Innovation. “This report gives countries and cities practical tools to reduce health inequities and achieve the SDGs.”

While a number of urban areas have improved health coverage,  the report finds that coverage for the poor still lags behind. Currently, at least 400 million women, men and children around the world are excluded from what is a basic human right: access to affordable health care. They have little or no access or to health services, and health insurance that is inadequate or non-existent.

The report includes a new Urban UHC Dashboard– an analysis of nine indicators for 94 countries– which shows that vast inequalities in health service coverage persist, despite urban areas reporting higher coverage of services than their respective national average levels.

Planning cities for people and health

Increasing urbanization poses a unique set of health challenges, including the double burden of non-communicable and infectious diseases, air pollution, access to water and sanitation, and the need to improve nutrition, increase physical activity, and build resilience to health emergencies. Meeting those challenges will require countries and cities to take bold steps towards UHC.

The ways that cities are planned, today and for the future, can profoundly affect the ability of their residents to live long, healthy and productive lives.  The report presents solutions for ensuring accessibility to water and sanitation, reducing urban sprawl while developing new transport options, increasing road safety, making cities age-friendly and accessible for persons with disabilities, managing urban health emergencies and increasing resiliency, while also improving healthier homes, particularly for those living in urban slums.

The report further presents a comprehensive set of interventions that can reduce the urban burden of non-communicable diseases. These include smoke-free city ordinances and enforcement; altering the built environment and promoting alternative transport options to foster greater physical activity and reduce air pollution; new approaches to urban food environment to reduce malnutrition and obesity; affordable and healthy housing conditions, and safety-related efforts.

Together, these have tremendous impact on reducing diarrheal diseases, indoor and ambient air pollution, non-communicable diseases, and other diseases saving millions of lives and increasing quality of life.  A variety of examples from New York City and China to Mexico City, Barcelona, and South Africa illustrate these impacts, particularly using multiple interventions.

“In cities, progress in health depends not only on the strength of health systems, but also on shaping urban environments. Capitalizing on such interdependent factors leads to efficiency, synergies and co-benefits, and is essential to attaining the SDGs,” said Alex Ross, Director of the WHO Centre for Health Development in Kobe, Japan, which led and wrote the report.

“A healthy population is essential for creating economically competitive and inclusive cities,” said Joan Clos, Executive Director of the United Nations Human Settlements Programme (UN-Habitat). “This new report documents opportunities for joint action to implement the SDGs, and is an important contribution to the Third United Nations Conference on Housing and Sustainable Urban Development to take place in Quito in October 2016 and to the realisation of the New Urban Agenda.”