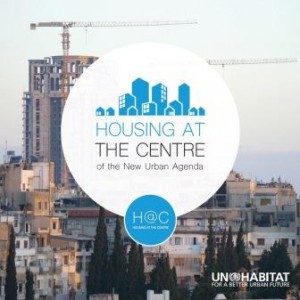 The shift towards a predominantly urban world makes the process of urbanization one of the most significant global trends of the 21st century. The significant transformation that has occurred in recent decades has given greater understanding and recognition to the role of urbanization in development. Towards Habitat III, UN-Habitat has concentrated efforts to re-establish the role of housing for the future of sustainable urbanization. With that aim, it is proposing the ‘Housing at the Centre’ approach1, which comes to position housing at the centre of national and local urban agendas.

‘Housing at the Centre’ aims to shift the focus from simply building houses to a holistic framework for housing development, orchestrated with urban planning practice and placing people and human rights at the forefront of urban sustainable development. At the national level, the goal is to integrate housing into National Urban Policies and into UN-Habitat’s strategic thinking on planned urbanization.

At the local level, the approach is to reinforce the importance of housing for urban planning and concomitantly to the development of cities and people. With the ‘Housing at the Centre’ approach, UN-Habitat will re-establish housing problems and opportunities in the international development agenda in an increasingly strategic manner vis-a-vis the future of urbanization.


Housing at the centre of the New Urban Agenda