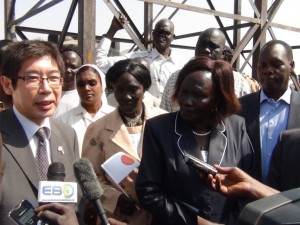 South Sudan, February 05 2016 – A delegation from the Government of Japan led by HE Ambassador Masahiko made a visit to the UN-Habitat project in Gureii to inspect the ongoing work to provide clean water and sanitation, livelihood to over 10,000 internally displaced people (IDPs), community residents and measures to mitigate the perennial flooding. This is one of the two UN-Habitat project sites in South Sudan in support of the reintegration of IDPs, the other location is in Wau one of the largest cities in South Sudan. The two sites of up to 18,130 people are benefiting from 2.4 million dollars from the Government of Japan under the project.

Floods are a widespread phenomenon in South Sudan that damage houses and crops, thereby making the permanent settlement of IDPs difficult. Both the flood prevention measures, the new water supply and sanitation will benefit not only the IDPs and retunees, but also their host communities while providing lots of opportunities for livelihoods for all.

Mr. Masahiko underscored the significance of the ongoing project terming it as a milestone in peace-building efforts and one of the great development contribution the Government of Japan has made to the people of South Sudan. The ambassador encouraged other development partners to emulate the UN-Habitat participatory approach to project delivery where IDPs, returnees and the host communities participate and are involved in the project planning and delivery. “With this project, communities own the process fully and make decisions on the best way partners can deliver essential services to them, and in the context of South Sudan this is the way to consolidate peace by bringing communities together to agree on their priorities and work together,” says Mr. Masahiko.

The Ambassador urged UN-Habitat to make sure that at the conclusion of the project, what is delivered to South Sudanese people is sustainable to benefit the targeted population in the long term. “I am happy with the collaboration between the Government of South Sudan and UN-Habitat and the work they are doing in this project, which will go a long way in alleviating the suffering of both IDPs and the host communities which have always been affected by floods and the lack of access to clean water”.

Hon  Chatherine Juan Bennia, Minister Lands, Housing and Physical Planning on her part called upon the friendly Government of Japan to consider supporting further, UN-Habitat’s work in collaboration with Government in South Sudan so that the project can benefit a bigger population in need elsewhere in the country. “I appeal to you, Your Excellency, that your friendly Government accepts to extend this project to other parts around Juba and the entire country where these important services are needed,” she urged. South Sudan has a huge infrastructure deficit, a large population has no access to clean water and sanitation and the entire country has only approximately 164km of the roads tarmacked for instance. The Minister thanked the Government of Japan and UN-Habitat for this inordinate cooperation that will see thousands of South Sudanese families directly benefiting from this development initiative.

Several speakers who spoke at the function all made a passionate appeal to the Government of Japan and UN-Habitat to work together and consider up-scaling the project terming the current effort a landmark in fighting waterborne diseases such as cholera and diarrhoea and improving living conditions mainly for women and children who most often face the hardship of fetching clean water from long distances.

The Chief, on behalf of the Community welcomed the visit of the Ambassador of Japan and thanked the Government of Japan for funding the project which alleviates their suffering. “We are happy about the work of UN-Habitat and the efforts its making to coordinate with our people and Government and everybody is happy since we know how the project will help our community,” says Mr. Nathaniel Pitia, the Gureii community Chief.

The Payam/Ward administrator was grateful to the Government of Japan and UN-Habitat for supporting them as the Government and coordinating closely with them. “We are all happy today even though the project is not complete yet, but our people are happy. When the Implementer wanted to start they came to us and we gave them our blessing and we are happy with them,” says Kenyi the administrator

“The South Sudanese people are fully aware how the people and the Government of Japan has stood with South Sudan during its most difficult times and for this we will never forget,” says Eunice Gordon, the Gureii local women representative. Those interested in the project are invited to contact Christian Okafor – christian.okafor@unhabitat.org at the UN Habitat South Sudan Programme, Juba.